As a young boy growing up in Egypt, Joseph Nakhla learned at an early age the importance of community and connecting with neighbours. 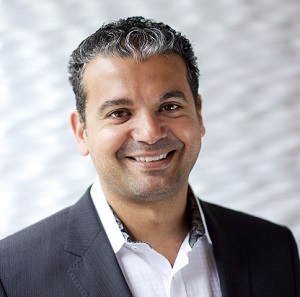 The founder and CEO of  technology companies Bazinga and Tribe grew up in  a lower middle class, small neighbourhood in Alexandria. The low-rise, five-unit stratified community had no rules.

“The only thing that was existing there was just the common understanding that as neighbours we had to do things for each other and we had to take care of our collective homes,” he says.

As a young boy, he did errands for neighbours like going to the store and picking up bread.

“When I moved to Vancouver in 1989 I saw, especially with the densification that occurred in the last 15, 20 years, that although we were all living really close to each other within close quarters, we still needed to define how neighbourhood works,” says Nakhla.

That was basically the genesis of the two companies he has launched in recent years.

The civil engineer, who has a passion for applied technology, began Bazinga in 2012 as a software platform designed to allow for communication and  access to information within stratified communities, focusing on condo living.

“It looks at all the key people that either live or work or render services to a community,” says Nakhla.

He added it also allows property managers to easily communicate with the owners and residents, “whether it’s a maintenance plan for the community or the building or it’s just a communication that’s required to go out to everybody.

“It can also introduce features like polling, which helps the strata council and the property management company to poll and figure out the sentiment of the owners on specific items.”

He says almost 2,200 communities in 40 cities across the globe are using the technology — from small entities with 15 to 20 units to massive towers of 1,100 units. Of course, the biggest footprint is in Canada, with the hubs being Vancouver and Toronto.

The success of Bazinga led to the creation of Tribe, which is powered by Bazinga and offers property management services.

Nakhla says the idea for Tribe developed about two years ago because there was a significant cross-section of buildings, and enough data available to see how buildings were being managed: The good, the bad and the ugly essentially.

“It was pretty evident from our technology approach that we were onto something. There was a significant amount of communities using our technology that really were pushing to see more and more features and more and more of the technology take over some of the functionality,” he says, adding they looked at how property management was being rendered around the world.

“We realized there was a big opportunity to bundle technology with a little bit of a different frame or positioning, which is a service-first approach to property management versus the traditional kind of, ‘react to all the issues that come through’.”

He says the property management industry in North America is growing.

Half of new homes stratified

“So we thought there was a really big opportunity for us to go for it,” says Nakhla.

“What most people don’t know is that Canada is actually one of the most advanced, if not the beacon, of stratified living in  the world,” says Nakhla. “Vancouver is almost the capital of that just by way of the incredible amount of densification that occurred over the years.”

He said the company has aspirations to expand nationally, particularly into Ontario and Alberta.

Fiona Therrien, vice-president of management services, says Tribe is trying to put a real community focus into its operations.