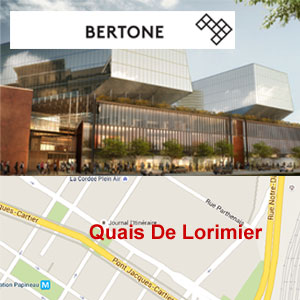 “We are creating a world-class urban environment that will provide unique experiences in a prime location close to downtown and popular tourist attractions,” said Bertone co-founder Michael Bertone.

“The type of development we are proposing has not been seen yet in Montreal nor anywhere in Canada: a balanced, mixed-use project with one of the largest public spaces in Montreal.”

Quais De Lorimier will be bound by De Lorimier, Sainte-Catherine, Parthenais and René-Lévesque streets, a block from the Papineau subway station. The land covers 400,000 square feet and the development will encompass 1.5 million square feet.

The privately funded development will be comprised of: a public and entertainment space (30 per cent); two residential buildings and townhouses catering to families (20 per cent); a commercial space along Sainte-Catherine Street, including a four-season interior passage running parallel (20 per cent); office space (20 per cent); and a hotel (10 per cent).

The development is subject to government approval and a permit request will soon be sent to the City of Montreal. If approved, the first phase — including the public, commercial and office space — is scheduled for completion in 2019.

“Quais De Lorimier is a human-scale urban destination designed to provide patrons and consumers a variety of unique experiences, including entertainment, shopping and gastronomy,” said Bertone. “It is an environment perfectly suited for a distinct shop, work, live, play and stay experience.”

The large central public space on the project’s fourth floor will be on the same level as the nearby Jacques-Cartier Bridge’s deck and will offer unobstructed views of downtown, islands and the Saint Lawrence River, as well as the illumination of the bridge that’s scheduled to begin next year.

The space will include an indoor events centre, several restaurants and an outdoor event space that will be converted to an ice rink in winter.

Bertone said the residential component remains to be determined and could include a mix of condominium and purpose-built rental apartments.

There have been no pre-construction commitments from retail, commercial or office tenants, or hotel operators.

“We have had many very positive and promising discussions up to now with potential tenants,” said Bertone.

The project is expected to create 400 direct and 1,200 indirect jobs during construction, and 6,000 direct jobs once completed.

Bertone was founded in 2010 by Michael and Claudio Bertone. Its holdings include SICAM Development Corporation, which has developed a number of commercial and mixed-use projects in the Greater Montreal Area, including Centre commercial Saint-Luc in Saint-Jean-sur-Richelieu, Sophia in Little Italy and Faubourg Vaudreuil in Vaudreuil-Dorion.