When it comes to buying and selling units of Boardwalk REIT these days, investors might want to pay as much attention to the sentiment of U.S.-based investors as they do the fundamentals of the Alberta-heavy multi-residential trust. 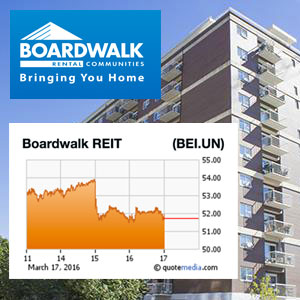 The Calgary-based company has been targeted by a number of American short sellers who are playing Boardwalk (BEI.UN-T) stock as a proxy for Canada’s economic woes, both real and forecast. All that foreign betting against the REIT has whipsawed shares in recent months, even as the trust has reported better-than-expected results.

“There is a double short going on with our stock right now,” said Boardwalk president Roberto Geremia. “One is, there is a U.S. short on Canada right now, big picture.”

That’s primarily U.S. investors who have watched the run-up in Canadian housing prices and believe the market is ripe for a U.S.-style correction.

Boardwalk management believes it is also the target of U.S. shorts who view the REIT as a way to play the energy price crunch which has hit the Alberta economy hard.

“So we get a double whammy, because we are part of housing and part of oil because most of our NOI comes from Alberta,” explains Geremia.

The negative sentiment around Boardwalk has obscured a surprisingly not bad 2015, Geremia insisted.

“What we have, we believe, is a broken stock, but not a broken company. The company has never been stronger than it is right now . . . we have been through these cycles before where it has been tough in Alberta and we have come out stronger.”

The REIT has focused on shareholder communication and outreach – and better-than-expected year-end results haven’t hurt either, pushing the stock out of the $40s into the $50s.

That is still undervalued in management’s view, which has meant an active buyback program on the part of the company. It fulfills two objectives: giving support to unit prices and is also arguably the trust’s current best use of capital.

“Right now if you look at it on an allocation of capital basis, at current prices we are seeing about an implied 6.1 per cent cap rate on our company. I can’t find decent multi-family real estate across the country in the low fives.”

Boardwalk has experienced boom/bust before

“The outside view of Alberta is the world is coming to an end. There is nobody here anymore. The last time I checked, our unemployment rate was 7.8 per cent, a little above the Canadian average. However, that still means 92 per cent employment.”

Geremia said the higher real estate risk in Alberta is not multi-residential, but rather commercial real estate, where vacancy is becoming an issue. “Yet companies like H&R (REIT) (HR.UN-T), their short position is very small,” said Geremia,who receives regular short position updates.

“If you understood the real estate asset class, the short you would do is commercial, not residential. But they are shorting residential first.”