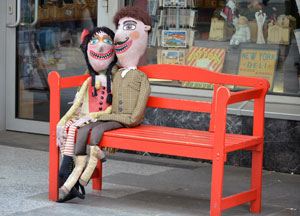 For those of us not intimately familiar with the Boomers as a demographic, and how to market to them, what follows is a crash course to help you. There is more to read, much more, if you choose to dive deeper. This is merely the view from 40,000 feet.

Let’s get the easy bit out of the way first. It seems to be generally accepted, although not universally, that Boomers are those people born between 1946 and 1964.

Beyond that simple definition, however, vast volumes have been written about the Boomers . . . mostly by the Boomers, who are endlessly fascinated by themselves. Whole libraries could be filled with books, films, reports, research papers, theses, and scholarly tomes devoted to the study of this particular generation. So I went to Wikipedia, because it’s faster than reading all that.

What I found was the following passage, which sums up the essential nature of Boomers in a way that is most useful if we are really trying to understand what makes them tick. As we try and figure out the housing needs, wants, and fears for this enormous mass of humanity, it’s important to keep this in mind:

“As a group, they were the wealthiest, most active, and most physically fit generation up to that time, and amongst the first to grow up genuinely expecting the world to improve with time. They were also the generation that received peak levels of income, therefore they could reap the benefits of abundant levels of food, apparel, retirement programs, and sometimes even “midlife crisis” products. The increased consumerism for this generation has been regularly criticized as excessive.

“One feature of the Boomers was that they tended to think of themselves as a special generation, very different from those that had come before. In the 1960s, as the relatively large numbers of young people became teenagers and young adults, they, and those around them, created a very specific rhetoric around their cohort, and the change they were bringing about. This rhetoric had an important impact in the self-perceptions of the Boomers, as well as their tendency to define the world in terms of generations, which was a relatively new phenomenon. The baby boom has been described variously as a shock wave and as the pig in the python.”

The key point, I think, is that Boomers see themselves as special, privileged, and deserving. I don’t mean this to sound rude or dismissive; I feel special, privileged, and deserving most of the time myself. It’s simply a useful and powerful filter to keep in mind, especially for the increasing number of non-Boomers who are in decision-making positions in the housing industry, as it helps us understand who we are making homes for.

Everything from location, to community engagement, to design, to sales and marketing should be viewed through the special, privileged, and deserving lens, to make sure we live up to these very real and unassailable expectations.

Further, the housing industry needs to target different Boomer sub-segments very precisely, and then live up to their unique expectations. Segmentation is of course very useful with large populations, because within any enormous group of people there will be huge differences in terms of behaviour, beliefs, and values.

It would be a mistake to assume these two sub-segments are the same audience with the same motivations; from the extreme ends of each there is an 18-year age difference. Think of any two people you know who are 18 years apart and how little they resemble each other in terms of consumer behaviour and overall lifestyle. A Multi-Family Home (MFH) project designed and built for Leading Edge Boomers would not/should not resemble a project designed and built for Trailing Edge Boomers.

Still, members of both sub-segments share an essential DNA-level Boomerosity, an archetypical yearning to be special, privileged, and recognized as deserving of beautiful homes packed with upgrades, on the sunny side of the street.

I don’t want to try and repeat everything that’s been written about Boomers. So in addition to the above macro-snapshot, I’ve curated some key facts that I think apply specifically to the MFH industry.

This is not an exhaustive demographic profile, just a quick skim across the top of the information available.

If you have more key insights to add that you think will help, please send them to me at [email protected].