The final wood panel was installed in the University of British Columbia’s Brock Commons, which will be the world’s tallest timber structure, this week. 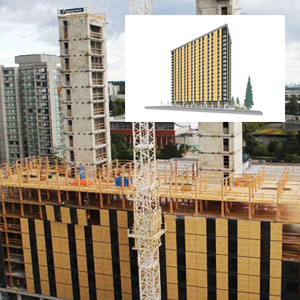 The student residence is scheduled to open in mid-2017 and could usher in a new era in wood construction as it has attracted international attention.

“It’s a good example of building a tall wood building for a good price and very quickly,” said Fast+Epp founder Paul Fast of the 18-storey structure, which is using strong and fire-resistant cross-laminated timber and pre-fabricated components to create a design that’s simple to replicate, cost-efficient due to shortened timelines, relatively quiet to build with, and environmentally desirable since wood is a sustainable material that stores carbon and doesn’t take as much energy to produce as concrete and steel.

“It’s a step by step process where every municipality has to go through the information and convince itself that it is safe. There will be other industry groups that will try to discourage the acceptance of wood safety, but there’s been tremendous interest from other Canadian municipalities and U.S. jurisdictions.”

Cross-laminated timber panels are comprised of good pieces of wood glued together in opposite directions so that they’re very strong and dimensionally stable compared to natural wood and won’t shrink or twist. They can be manufactured in 10-foot widths and up to 40-foot lengths and be set in place on top of wood columns quickly and easily. This allows for a high degree of connectivity and eliminates the need for supporting beams, and has meant that Brock Commons has been erected at a floor a week pace.

The University of British Columbia (UBC) had funding in place to subsidize research and design efforts that helped make Brock Commons a reality. The building also had to go through two independent peer reviews from engineering firms with experience in timber design and construction, undergo extra testing on the panels and get special zoning from the B.C. provincial government to allow it to build above the maximum six storeys permitted for wood structures in the national building code.

Brock Commons will house 404 students in 272 studios and 33 four-bedroom units, and feature study and social gathering spaces for upper year and graduate students. There will also be a ground-floor lounge and study space for commuter students.

Fast+Epp is looking at large wood-framed building projects in eastern Canada and the eastern United States that will face approval challenges, but Fast said: “I have no doubt that within five to seven years these questions are not going to be as common anymore.”

Brock Commons will be priced pretty closely to a previous UBC student residence that was the same size and had a similar layout but was built with steel and concrete. Fast estimates that the 160,000-square-foot building will cost from $220 to $240 per square foot to build, which would result in a price tag in the neighbourhood of $37 million.

Fast said that wood buildings of up to 40 storeys are technically achievable, though he thinks there’s a sweet spot in the six- to 20-storey range.

“Beyond that it’s perfectly doable from an engineering perspective and on the fire safety front, but it becomes more of a challenge from an economic point of view the higher you go.”

Since Canada has so much forest, it should be a global leader in wood construction materials. And with the technical know how gained from Brock Commons and other projects, B.C. is becoming a launching pad for the expansion of building bigger wood structures around the world.

Fast+Epp was established in 1985 and has won more than 90 national and international awards for work done on a variety of public and private projects, including residential, commercial, institutional and transit. It has an office in Edmonton, recently opened in Seattle and New York City, and has a presence in Frankfurt, Germany as well as people with European backgrounds working in Canada.

“We take the best from Europe and bring it over here and the best from here and take it to Europe,” said Fast. “We like to innovate, explore and break new ground where we can.”

While Fast+Epp has gained a reputation for using wood and wood products — including the Richmond Olympic Oval roof, the longest hybrid wood span roof in the world — the firm doesn’t want to be known as a “one-material horse,” according to Fast.

“Wood is underutilized and we’re bringing more wood into our projects, but often in combination with steel and concrete. We don’t want to force a square peg into a round hole. Sometimes wood isn’t the right solution and you have to mix it with something else.”