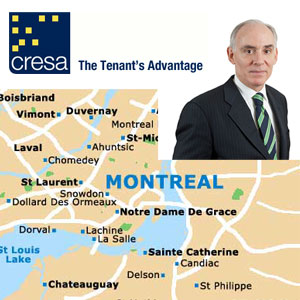 “I’ve known of the Cresa brand and had respect for them for some time,” said Cowper, the new branch’s managing principal. “I’ve always been a tenant representative-focused broker in the Montreal market.”

Cowper doesn’t expect much to change under Cresa, though he praises the support he’s received in launching the Montreal office and expects to work closely with other branches — particularly those in Ottawa and Toronto.

“All of the people have essentially the same focus and we can leverage off each other’s best practices and client relationships,” said Cowper. “I’ve been quite impressed with what I’ve seen so far in how they’re organized and how they share information within the company.”

Cowper plans to follow the model initiated by Cresa’s Ottawa office, which started small and has grown steadily over a relatively short time.

“I’m on my own for the moment with some administrative help, but I’m going to build a solid team,” said Cowper, who has represented the interests of Montreal-based corporations, professional firms and not-for-profit organizations.

“I’m quite confident that the clients I’ve done work for in the past will want to work with me again if they have a requirement in the future.”

Office vacancies have been steadily increasing partly due to new construction and companies looking to reduce costs by making more efficient use of space and downsizing.

Cowper points out the downtown office vacancy rate of more than 12 per cent and the Greater Montreal vacancy rate of about 15 per cent are higher than in recent years and have led to a “tenant-favourable market” where incentives including free rent and tenant inducements are being offered.

“Probably nine out of 10 clients end up looking at the market very seriously and then decide to renew because the existing landlord doesn’t want to see them go,” said Cowper. “It’s less costly to retain a tenant than to backfill once they’ve moved out.”

The industrial vacancy rate is below seven per cent, with most properties located in the suburbs. There’s been new development in the borough of Saint-Laurent and retrofitting projects in other areas.

“There are plenty of options for a user, depending on the sub-market of Montreal,” said Cowper. “There are also quite a few developers that are ready to do a build-to-suit if someone is looking for something special.”

In addition to Montreal, Cresa recently opened offices in Australia, the Netherlands and Belgium. It has locations in more than 75 markets worldwide.