Burnaby is attempting to shed its reputation as a suburban cousin with a new, bold plan to transform its burgeoning Metrotown neighbourhood into a downtown core that could eventually rival Vancouver’s. 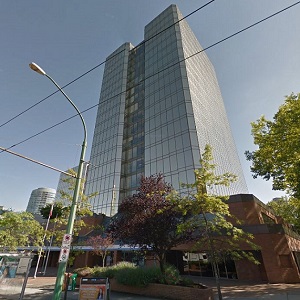 The Metro Vancouver building in Burnaby, B.C., is up for sale. (Google Maps image)

The city — B.C.’s third-most populous municipality after Vancouver and Surrey — says it anticipates approximately 125,000 new people will call Burnaby home by 2041. The plan will increase and spread high-density zoning allowances throughout six sections of its Metrotown core.

The last version of the Metrotown plan came out in 1977, said Burnaby City Councillor Colleen Jordan. “Metrotown mall wasn’t even there yet,” she told RENX.

The plan aims to pave the way for changes in the area over the next 40 years.

She said there’s been a tower building boom in the area over the last eight or nine years after the city allowed for higher-density buildings in the Metrotown core.

Current zoning getting tapped out

“Those places that were, in the original plan, defined as high-density are just about all gone now,” she said. “They’re either under construction or in process or have already been built.”

The new plan will allow for more mixed-use towers in the sections of Metrotown clustered around Kingsway and Central Boulevard. A section of Kingsway, between Wilson and Nelson Avenues, would eventually transform from mostly low-density commercial, to mixed-use towers with commercial, office and residential space.

High-density residential towers will also be permitted in additional pockets of the neighbourhood, especially along the eastern flank of Burnaby’s Central Park.

Today, Metrotown’s skyline of towers is already taking shape. But travel only a few blocks from the central core around the Metrotown SkyTrain station and the buildings become three- and four-storey walk-up apartments. A few more blocks beyond that, the streets are lined only with single-family houses.

Metrotown is a cross-roads for the region, the path of the original SkyTrain line and home to the city’s only large office towers and hotels, Jordan said.

The unanimous July vote was held up by a group of protestors at City Hall chambers who protested the new plan, saying it will oust residents of the aging low-rise apartments when the owners decide to sell to wealthy developers.

The protest continued until the council members left the room and the Burnaby RCMP was called to the meeting, according to local media reports.

Jordan acknowledged those concerns to RENX. “We want to work with that community, and we also want to work with governments, both federal and provincial,  to include in those developments opportunities for rental housing and non-market housing, too.”

Earlier this month, the Metro Vancouver Regional District announced it was seeking a buyer for its soon-to-be-vacated office tower in the heart of the Metrotown area. Once sold, it could see a dramatic redevelopment.

The office tower at 4330 Kingsway was built in 1983. It is part of a two-building property, valued at $87.7 million, that’s being marketed by CBRE.

Metro Vancouver bought Metrotower III, a nearby 29-storey office tower, in 2015 for $200 million.

“The building definitely can be redeveloped,” he told RENX on Thursday. “Metro Vancouver will be moving out in November and moving into their new building.”

Quattrin said the old building will be delivered vacant and investors would have the opportunity to redevelop it. “Or they can fill it back up and hold it for a number of years until they’re ready to develop it.”

No buyer is yet in place, he said.

“We’re just in the beginning of the marketing phase,” he said. “It’s a significant site in Burnaby’s Metrotown plan, and I think it’s going to make a significant contribution once its redeveloped.”

Another recent project currently under pre-construction is Belford Properties’ Sun Towers, which is being marketed by Colliers International.

The first 41-storey phase of the two-tower condo project is set to complete in 2021 and includes 70,000 square feet of class-AAA office space that’s for sale, as well as 30,000 square feet of strata retail said Cecilia Tse, a senior vice-president with Colliers in Vancouver.

She said the project will eventually include a daycare and a restaurant. The floorplates for the office component will be 25,000 square feet, among the largest available in Metro Vancouver, she said.

She said that 10 years ago, the office vacancy rate for Burnaby was about 12 per cent. Now it’s 6.9 per cent.

“Moving forward, because there is no new supply and continued demand, we actually expect the office vacancy rate will drop to about three per cent.”

She said developers should take notice of the new downtown plan.

“I think we’re going to see more commercial buildings . . . and you will see more mixed-use development coming up,” she said. “I do believe Metrotown will become an economic, social and cultural hub.”