The Bow front and centre on Calgary sublease market

When the Bow tower was built in 2012 in the heart of Calgary, it was a symbol to the rest of the world the city was an economic powerhouse. 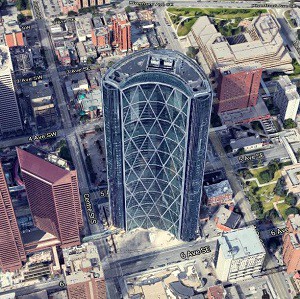 Calgary’s iconic Bow tower has almost a half million square feet of floor space up for sublease by two of its major tenants. (Google Street View image)

The just under two million-square-foot, 58-storey skyscraper, the tallest west of Toronto at the time, was Encana’s signature headquarters building in the oilpatch, illustrating the company’s success and the city’s stature on the global energy front.

But times have dramatically changed due to a collapse in oil prices which began in late 2014, resulting in two years of recession for Calgary and thousands of job losses in the core.

Today, with the downtown office vacancy rate hovering at a historic high of close to 25 per cent, energy giants Encana and Cenovus, who occupy the Bow, have close to half a million square feet of office space available on the sublease market.

“Although Calgary has always been a very active sublease market what makes this space unique is the ability to do sublease terms of up to 20 years – rare in any market,” said Adam Hayes, principal and broker with Cresa Alberta, a commercial real estate firm specializing in tenant representation.

A listing brochure by CBRE indicates Cenovus has 332,895 square feet available with a sublease term of five to 20 years and market rates for the asking net rent.

In an email Cenovus spokesman Reg Curren wrote: “Our sublease marketing activities continue with the Bow and the other spaces we’ve previously identified. . . . We’re marketing approximately 800,000 feet across seven downtown locations. Not all of that space is currently vacant and we continue to review sublease results with our current needs.”

In another listing brochure by Avison Young, Encana has 156,251 square feet available for immediate occupancy with the term negotiable and market rates for the asking net rent. Encana could not be reached for comment.

“There are a lot of tenants in the same situation by virtue of the size of the company. It really depends on how much surplus space they’re dealing with,” said Hayes.

“What it tells me is that a lot of companies are re-calibrating their businesses,” he explained. “As a result of that, the office space comes into play at some point down the road and we’re far enough into the downturn that a lot of companies have rationalized what their companies are going to look like, how they need or have to continue to re-calibrate and they need to try and monetize some of this surplus space even if it means doing deals in today’s market.”

Hayes said net rental rates for top-end sublease space in the downtown core are in the low $20s-and-just-below range per square foot. The rates have fallen by between 30 to 50 per cent over the last three years.

Richard White, an urban strategist in Calgary, said the Bow is an iconic building.

“From an architectural point of view, the Bow is a very interesting building because it was probably the first building to go away from the box,” said White. “It became circular. It’s called the Bow but I’ve also heard it called the Banana. It also has a barrel shape to it. I’m surprised nobody has really picked up on the fact that it looks like a barrel (of oil).”

It was also a groundbreaking new build in that it was the first oil company to go east of Centre Street in downtown Calgary.

“Centre Street was sort of the dividing line that there was the business community to the west and then the sort of civic, cultural, government precinct to the east. It really broke a lot of barriers in that way,” said White, adding the Bow was purpose-built for Encana in contrast to many buildings constructed by pension funds for multi-tenant use.