The oil price collapse which began in the latter half of 2014 triggered a skyrocketing downtown office vacancy rate in Calgary’s skyscrapers and a new reality for the market. 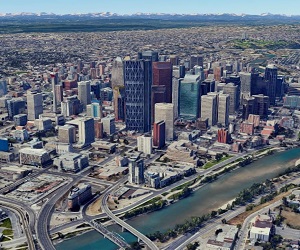 With the vacancy rate still hovering north of 25 per cent, Calgary’s commercial real estate market won’t get back down to a balanced level any time soon. That reality has triggered a typical reaction to supply and demand dynamics – more sublease space on the market, more incentives to lease, and of course lower rental rates.

But it’s also triggered new ways of thinking with ideas running the gamut from converting office space to residential use, to shorter lease terms and smaller floor plates. The problem is Calgary’s downtown office market is skewed to larger companies with larger floor plates and longer lease terms.

“Due to an overabundance of full floor opportunities, landlords are actively combatting vacancy by cutting up space in order to accommodate smaller tenant requirements,” said CBRE in a recent downtown office market report.

Deana Haley, vice-president of client services with Calgary Economic Development, said the city is home to fantastic, well-built infrastructure but the real estate industry is still contemplating what to do with that space.

“Over time, of course, the market will correct.”

Haley said it’s important for the real estate industry to have flexibility. Many companies, even larger ones, sometimes need smaller amounts of space for project teams to set up and access local expertise or resources.

“The ability for project teams to expand and contract as a business is coming in is definitely a trend that’s going across North America and in Calgary,” she said. “So being able for buildings and landlords to be responsive to that kind of environment will be important, so that we can continue to attract those types of teams here and help them grow and expand.”

The report said demand from smaller tenants is growing noticeably and demand for space under 5,000 square feet continues to be high.

Scott Hutcheson is executive chairman of the board for Calgary-based real estate company Aspen Properties, which owns office buildings in the downtown core. He said the city’s central business district has gone through three distinctive periods regarding the size of floor plates for buildings.

“Now, I’m going to say by 2010 what was driving our economy was clearly the very large tenants. So we adjusted then and we went anything bigger than 22,000 square feet to 26,000 square feet.

“Today, because we’re now seeing a proliferation of smaller tenants and less of the large oil companies – that’s where the growth is coming – is that we can actually go back to a 15,000- to 17,000-square-foot floor plate and those floors break up quite nicely for a smaller tenant.

“That’s what I would call a trend.”

In today’s market, added Hutcheson, a smaller floor plate for multi-tenant users is more in fashion than it has been in 20 years. He said this is an important consideration in today’s high vacancy market because the city isn’t going to see construction of new office buildings in the near future.

“You’ve just got to find out what floor plate might fit your needs as a tenant, and as a landlord what can I do to make my floor plate as efficient as possible if I’m going to break it up into smaller users,” said Hutcheson, adding smaller floor plates are more conducive to breaking up for multi-tenant use.

Most of the higher class of office buildings have the larger floor plates. The lower quality B-, C- and D-class buildings typically have anywhere from 10,000- to 15,000-square-foot floor plates which are much easier to carve up for small tenants, said Kwong.

A recent CBRE downtown market report said: “As Calgary’s real estate sector is oil and gas dependent, the size of tenants has reduced significantly since oil prices fell. Not only have both major and minor companies downsized the number of employees, the amount of space per employee has drastically decreased in order to maximize efficiency in the workplace.

“There has been larger demand for smaller pockets of space and little demand for large block space.”