Calgary Co-op, one of the largest retail cooperatives in North America, has embarked on an ambitious $2 billion-plus capital investment campaign over the next few years to expand the grocery chain’s operations and create several mixed-use developments in the region. 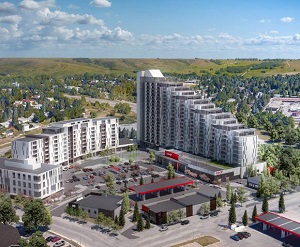 The company, with more than 460,000 members, 3,850 employees, assets of $565 million and annual sales of just over $1 billion, has proposed an investment program in Calgary of $1 billion over the next eight years to expand its retail operations. When investments by local developers into the residential and office components of the various projects are added to the mix, an additional $1.25 billion will be invested.

Tony Argento, the company’s director of real estate and development, said “we’ve got to try and keep competitive with all of our competitors that are coming to the market.”

“Twenty-five years ago, it was really only Co-op and Safeway. Now I’m not sure what that number is. There seems to be new guys coming every day into the market. Our market share keeps shrinking, so we have to be be creative in ways of keeping our lines of businesses going. . . . Keeping us growing and keeping us ahead of the competition.”

“From a purely real estate position, I joined the company four years ago. When I looked at the portfolio, one of the things that kind of distinguishes Calgary Co-op from everybody else is that we’ve been around since 1956 and we were able acquire assets in fairly strategic locations in Calgary,” said Argento.

“A lot of those properties, the properties that we bought at the time were farmland and, actually, communities that grew around us. Back in those days, we were farmland – now a lot of our properties are considered inner-city. So we’re sitting on some really valuable real estate.

“So a decision was made about three years ago to start looking at what can we do on our sites to maintain the services that we’ve been providing our members . . . on these sites, but add other mixed uses and things that could benefit the community, benefit the Co-op and its members. So a fairly aggressive capital plan was put in motion two years ago.”

Community gardens and functional greenhouses will be built on the roofs of Co-op’s grocery stores in the new development projects and projects will be built to exceed LEED standards.

These are some of the development projects the company has in mind:

Argento said the company is looking to open new stores in the neighbourhoods of Sage Hill, Springbank Hill, and Silverado as well as in Okotoks, Cochrane and one or two sites in the Calgary’s downtown core within the next five years.

“The Silverado, Okotoks and possibly the Cochrane site will have mixed-use, also potentially our Beddington site. I’s a 14-acre property and it’s got a lot of excess land on it. That potentially could be a redevelopment site and we’re also looking at some of our other centres,” said Argento.

“We’re looking at all our sites. We do sit on some very large parcels of land that can accommodate mixed-use.  . . . The reason we’re doing this, too, is we own all of our properties outright. We have little to no debt. So from a purely real estate perspective, that’s the best position to be in. There’s opportunity where we can leverage that.

“And the fact is, too, that a lot of the sites that we are targeting to redevelop are in established communities where not a lot of new development is occurring so there’s a demand for it and we’re not actually competing with other builders and developers.

“When we’re going to put this product out to market, we know we can pretty well pre-sell the development outright.”