When CrossIron Mills opened in August 2009, there were many nabobs of negativity questioning whether the shopping centre on the northern outskirts of Calgary would be successful. 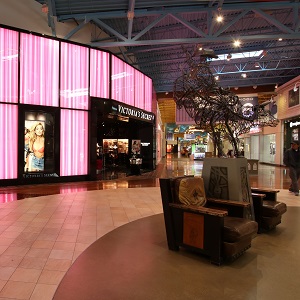 Victoria’s Secret, containing a Pink store, is one of the newest additions at the CrossIron Mills shopping centre in Rocky View County, just outside Calgary. (Image courtesy CrossIron Mills)

After all, it was entering the market shortly after a vicious global financial crisis took a heavy toll on the economy. The new venture was also built in what was considered an out-of-the-way location, in Rocky View County, outside of city limits along the Queen Elizabeth II Highway.

“It’s crazy that it’s been eight years already,” says James Moller, general manager of the Ivanhoe Cambridge-owned mall. “CrossIron Mills is still a unique shopping centre in the Southern Alberta market. Branded, outlet, factory-discount stores. We’re still kind of like one of a kind. . .  We’re something different that you can’t find anywhere else. It’s been a wild success story.

“There were lots of people doubting whether it was going to be successful and it’s far exceeded anybody’s expectations.

“The last year or two has been a little bit tough on the economy and there’s been some pretty high-profile (retail) bankruptcies, but it hasn’t really slowed us down. I guess there was maybe a bit of a slowdown last year but all of sudden it’s kind of like the floodgates have opened. We’ve had a number of new stores open this year.”

“The sales have grown significantly since then,” he says, adding mall occupancy is just under 95 per cent and it is budgeted to be closer to 96 per cent by the end of the year.

Michael Kehoe, an Alberta-based retail specialist with Fairfield Commercial Real Estate Inc., in Calgary, says CrossIron Mills has been a runaway success. It caters both to consumers from across Southern Alberta and to tourists.

“The project quickly established itself as a major draw with many first-to-market, category-dominant retailers such as Bass Pro Shops and Saks Off Fifth,” says Kehoe. “It should be noted CrossIron Mills was the only shopping centre in the greater Calgary region (which) was not seriously affected by the recent economic downturn. It continued to have a strong overall sales performance and solid customer footfall.

“The developer differentiated the shopping centre ‎from the other retail offerings in the market with unique retailers and created an exciting, destination shopping experience.”

Part of its success is due to the completion of nearby Stoney Trail, Calgary’s ring road. It provides easy access to the shopping centre from neighbourhoods quite far away.

The footprint increased because the food court was relocated and opened in July 2016. That added close to 50,000 square feet of retail space. The new food court increased from 19 to 24 restaurants and there are about 220 stores in the shopping centre.

Last year, CrossIron Mills opened a Saks Off Fifth store as an anchor to the mall and a Nike store. Last month, a new Victoria’s Secret, with an enclosed Pink store, opened in 12,000 square feet. In May, Famous Footwear opened and in July so did an Aerie store. Sport Chek spent six months remodelling its 30,000-square-foot anchor store.

Moller says a new restaurant called Bangkok Buri has also been very successful since opening a month ago.

There is more to come.

“We’ve got a really high-profile retailer that’s under construction and they’re opening in October. We’re all excited about it,” says Moller, who can’t release the name of the company just yet. “They’re very, very big. . . . This is a real game-changer for us in terms of a fashion retailer that’s world-renowned.”

Mall management is also starting to look ahead at a number of its merchants’ 10-year leases which are coming up for renewal in August 2019.

“We figured out there’s 531,000 square feet of leases rolling over in 2019 and that’s far too many to handle from a legal and leasing perspective, so we’re already in discussion with them.”