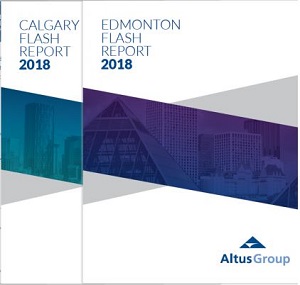 But the level of commercial real estate activity was much different in the province’s two major cities, according to two Altus Group reports.

While Edmonton saw strong investment in the retail and office sectors, Calgary saw declines in these areas. Residential land is the sector Calgary received much of its investment last year, compared to Edmonton where the office sector posted the largest increase in 2017.

* Related: Battle of Alberta? Edmonton holds all the CRE cards

“Both markets had strong investment volumes,” said Matthew Boukall, vice-president of product management with Altus Group based in Calgary. “In Edmonton, it speaks about the downtown market specifically where the Ice District has created a lot of interest in the investment in the downtown.”

Those overall investment numbers in both Calgary and Edmonton are supported by a provincial economy which has rebounded from the depths of the recession in 2015 and 2016.

According to the Conference Board of Canada’s Metropolitan Outlook report, Alberta led the country in economic growth last year, with real GDP expanding 6.7 per cent. Growth was spurred by a recovering energy sector, which had been devastated by the collapse in oil prices and the subsequent 2015–16 recession — the worst in more than half a century, it said.

Going forward, the conference board said oil production increases will moderate as less new productive capacity in the oil sands comes online. Alberta’s economy is expected to grow 2.1 per cent in 2018 and 1.6 per cent in 2019.

“I’d say the key thing that’s setting Calgary and Edmonton apart right now is the (residential) inventory. The state of the inventory. Edmonton didn’t really see a massive impact from the recession . . . Sales dropped off but not as significantly as we may have expected and the overall level of inventory remained fairly high. So builders basically kept building during the recession,” said Boukall.

“So where we are today the market is feeling a little bit of pain from the higher level of standing inventory, the completed and unsold inventory of new condo and townhouse projects. In contrast, Calgary the inventory levels were starting to drop as the market got slower and we’ve only actually seen new product introductions in about the last 12 months and that’s what’s starting to drive a lot more activity. So the market in certain areas was a bit starved for multi-family product especially in the suburbs . . . As that product came to market it’s actually done quite well.”

According to the Altus Group report, in Calgary the residential land market posted the largest absolute volume year-over-year increase in investment – more than doubling to $561 million.

The report said medium-density land was the biggest contributor to residential land volumes with $183 million, accounting for almost one-third of overall investment in this sector. High-density land posted the largest year-over-year increase – more than five times to $128 million.

The office sectors in Alberta’s two major cities have been following different paths as a result of the slowdown in the economy.

Ray Wong, vice-president of data operations and data solutions with Altus Group based in Toronto, said Calgary has always been seen as a corporate head office centre, especially for the energy sector. The building cycle has basically come to an end as demand has decreased.

But in Edmonton the building stock has been aging, so a number of new projects have come out of the ground recently, he said.

“The stock is changing to attract the newer tenants, especially on the tech side with the type of office environment and modern amenities it offers. So Edmonton, from the office inventory side, was playing sort of catch-up compared to Calgary, whereby the office market was a little more established,” added Wong.

He said in the past office tenants had difficulty locating in Edmonton because of the lack of modern office buildings, but new construction will position Edmonton well for further growth in the office market.

Calgary’s downtown office market heading into the second half of the year has a vacancy rate of between 23-25 per cent while Edmonton’s is about 12 per cent.

Here are some other interesting highlights from the Calgary and Edmonton reports: