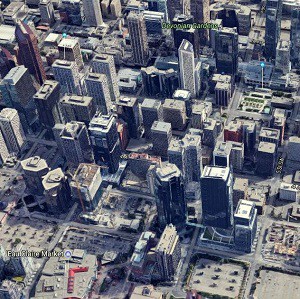 Downtown Calgary, where a continuing downturn in the office market has also hit area retailers, according to a Barclay Street report. (Google Maps image)

The Central Business District (CBD) retail vacancy rate fell from 11.5 to 10.8 per cent by the mid-point of this year.

However, it remains significantly higher than Calgary’s overall retail vacancy rate of three per cent, which has been driven mostly by the city’s strong suburban shopping centres, according to the firm’s 2017 mid-year retail market analysis.

The Downtown and Beltline markets account for about 10 per cent of the city’s retail inventory by square footage and the loss of jobs and people in the downtown core has been draining shops and restaurants.

Meanwhile, City Council and other stakeholders have been adjusting bylaws and freeing up funds to stimulate the downtown retail market.

She said the continued downturn in oil and gas has the downtown office market flirting with 30% vacancy. “That’s hitting the retailers quite hard.”

“There’s 30 per cent less people in general downtown so all of the retailers that are amenities in those towers are struggling,” she said. “Office is really the huge story and its trickling down to retail.”

It’s visible on Stephen Avenue where empty restaurants are popping up. “They’ve gone under because people that had large expense accounts that were there a bunch of times a week entertaining clients don’t have jobs anymore,” McGregor said.

She said most forms of suburban retail in Calgary remains very strong.

To help prevent further retail bleeding downtown, the City amended its Land Use Bylaw to create a Centre City Enterprise Area that would suspend the requirement for development permits for changes of use, exterior alterations and small additions.

The amendment, which took effect on Monday, will remain in place for only three years, and excludes some businesses including liquor stores, pawn shops and nightclubs.

McGregor said the Calgary Economic Development Board (CED) is also working on a plan to permit pop-up retail and possibly pop-up office spaces in the CBD.

City to inject $10 million into downtown

“We’re looking at a test project for that,” said McGregor, who is a board member. “But that’s one point that the CED is working on that hopefully will bring more people back downtown.”

The city has also set aside $10 million to help revitalize the downtown, according to the Calgary Herald.

Calgary’s downtown office vacancy rate is projected to rise to 27 per cent later this year when two new offices open, according to the Conference Board of Canada.

New ways of thinking about downtown retail in Calgary are needed, said Craig Patterson, a retail consultant and editor-in-chief of Retail Insider.

“Landlords in Calgary have the opportunity to take some under-utilized space . . . and animate it with something interesting,” he said. “It could be anything from a one-week pop-up with a new brand, a new food concept. They could get really creative and innovative.

“Doing something that’s temporary in nature builds the perception of scarcity, and people will be more likely to go somewhere when they know it won’t be there forever.”

Calgary’s downtown core is not a tourist destination, Patterson said. “There are also not enough people living downtown, like in Vancouver, to support a lot of retail, so it really is the office market (that’s) shopping downtown,” he told RENX in an interview.

He said the CBD retail vacancy could be a lot worse, given the realities of the office market.

“Nonetheless, 10 per cent is unusually high, but it’s not as high as some American suburban shopping malls that are struggling,” he said. “Some of those malls have vacancy rates, I don’t want to say 50 per cent, but it’s quite substantial.”

“Calgary has three very strong suburban centres and a hybrid outlet centre which is also popular,” he said. “The Chinook Centre is a very strong mall and it’s only going to be getting better because Saks Fifth Avenue is going to be opening a 115,000-square-foot store in early 2018.”

Nordstrom opened its first Canadian store at Chinook Centre. “It’s got a range of retailers that includes some luxury stores like Tiffany & Co. and Burberry. People are shopping.”

McGregor said there are downtown retail deals to be done.

“Rates are lower than they have been, but they’re still not rock-bottom,” she said. Unless oil and gas rebounds or landlords and developers begin to diversify their tenancies, McGregor expects the vacancies to remain.

“I think retail will continue to either stick around this mark or even the vacancy could creep a bit higher until there’s some certainty as to who their customer base will be.”