The depressed state of the Calgary office market evokes memories of the city’s situation seven years ago. What’s still unknown is if it will recover as quickly this time around. 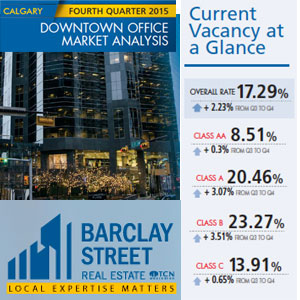 “What is very similar in comparing January 2009 to January 2016 is the amount of inventory in the office market that was under construction,” said Dan Harmsen, vice-president and associate broker for Barclay Street Real Estate, which recently released reports on Calgary’s downtown, Beltline and suburban office markets for the final quarter of 2015.

“Back then we had Eighth Avenue Place, which was another million square feet. We had a few other buildings under construction, as The Bow Building was nearing completion. Now we’ve got Brookfield Place I, the TELUS Sky tower and the Manulife building (707 Fifth).”

A suburban office building can take 12 to 18 months to construct, while downtown office towers can take three years. A lot of things can change in that time, as witnessed by the once-booming Calgary economy hitting a major rough patch just over a year ago when oil prices collapsed.

“We are going to be having inventory coming on the market when we don’t need it,” said Harmsen. “As a result, as in January 2009, people are anticipating that this office space won’t be absorbed for a very long period of time.

“There’s an assumption that office rental rates will be discounted for the foreseeable future. Boy, were they wrong in 2010.”

A-class downtown office rates have been impacted the most as a result of subleasing and contraction in the oil and gas sectors, which are heavily concentrated in A- and AA-class buildings downtown. The AA-class space, however, more often has long-term tenancies with larger companies that possess financial investment windows significantly longer than smaller firms.

“Most junior and mid-caps are in A-class buildings downtown,” said Harmsen. “They’re the ones that are shedding most of their space in the form of subleases, which then impacts the ability of A-class landlords to do transactions.”

Harmsen said a large majority of the most attractive incentives are being offered on the sublease market, as there are lots of landlords that don’t have expiries or headlease exposure for a number of years and aren’t yet in a position where they need to offer steep discounts.

Still, he expects “some continual fantastic opportunities” for renters in the sublease market.

Harmsen has seen rents drop from 30 to 50 per cent on a net basis, while he said sublease rates are all over the map.

Sublease opportunities have increased the appetite of some tenants for a move to higher-quality buildings. However, factors such as tangible and intangible moving costs, higher operating expenses in A- and AA-class buildings and unknown renewal rates upon sublease expiry are giving them pause for reflection.

Beltline and suburbs not hit as hard

Office properties in the Beltline and suburbs aren’t as dependent on the oil and gas sectors. And while rental rates in those areas are also dependent on space requirements, quality of building and length of lease, they’ve been somewhat more resilient than downtown. Some buildings are still taking hits, however.

Harmsen said there are no subleases available for 1,000-square-foot spaces in the Beltline, and headlease deals are in the mid-teens dollar-wise. Meanwhile, three-year subleases for spaces of 10,000 square feet or more can be obtained for single-digit dollar amounts.

Buildings already under construction will continue and those in the pre-lease stage will move forward as long as they hit their target rates, according to Harmsen. While labour costs have come down, the low value of the Canadian dollar has increased the price of materials, so construction costs aren’t dropping.

“In order to build a building, rental rates in the suburbs still need to be in the mid- to high-20s, and it depends on what type of building you’re building in the downtown core,” said Harmsen.

No properties owners have changed their focus or proposed use to try to adapt to the market conditions, though Harmsen can envision the repurposing of certain assets if the current economic situation is protracted.

Despite the uncertain fog hanging over the Calgary office market, Harmsen believes the city still offers great opportunities. He cited the spirit of “entrepreneurship and resilience” that remains, as well as solid infrastructure and a young and educated workforce as positive factors fuelling his optimism.

“We have an amazing ability to diversify our economy and this is going to be a wonderful opportunity to become less reliant on the oil and gas industries. Everybody in Canada and North America should look at Calgary as a great place to do business.

“Our occupancy costs are at an all-time low and our labour costs are going down for the first time in 20 years.”