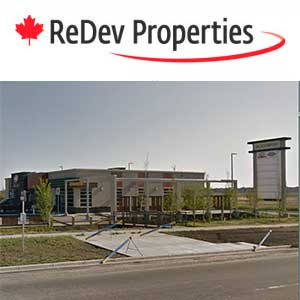 Richard Crenian, founder and president, said its first project is new construction at Jacksonport Retail, on a three-acre site near the Calgary International Airport.

He said this is the right time in ReDev Properties’ evolution to become involved in this type of development project. The venture will focus on new construction for properties that fall under the ReDev portfolio (see earlier story, Redev looking to buy shopping centres: CEO).

“I have experience in the development of commercial condos and residential units, and it is clear there is a strong demand for projects like Jacksonport Retail,” said Crenian.

“While covered malls are facing many challenges, customer foot traffic in neighbourhood plazas remains very high. We know there is growing demand for the core retail outlets and services we offer at our plazas.”

ReDev bought the Jacksonport site a few months ago.

The existing Jacksonport Retail plaza has 25,000 square feet of development with an opportunity to build another 25,000  of new retail space. It is currently comprised of a medical centre, convenience store and gas station, Dairy Queen and several other commercial retail units. That will remain an income-producing property for ReDev.

Crenian said the company will build three new structures of about the same size. Construction is slated to begin by the summer and be complete by the end of 2019.

“We’re selling all the buildings,” he said.

ReDev is also involved in negotiations for another project similar to Jacksonport Retail, as its business model shifts to redevelopment of retail and commercial condos. The company is based in Toronto, but the majority of its properties are in Alberta and Saskatchewan.

Crenian said new commercial construction will be focused on Calgary and Edmonton.

“One of the things we noticed in Calgary is that there was a big ethnic community that was growing. . . .  There’s pockets of very successful ethnic people that are coming to Canada who have done very well for themselves, but the difference is the culture shift in Canada. We can rent, we have no problem renting retail space but if you’re an ethnic community the ethnic community likes to own,” he said.

“We’ve always done construction in terms of value-adding on malls. But we’ve never done buildings for the ethnic community. We’ve discovered an area where we think we can be successful in doing this. I think the market is very limited, but I think there was an opportunity for us to grab that market.”

ReDev says it has managed more than $2.5 billion in real estate assets since 2001. It is primarily focused on the retail space.

He said the company is also considering building and developing multi-family residential rental properties in the future. During his career, Crenian said, he has built and sold more than 12,000 residential units.

“The future is looking good for us. We’re focusing on the commercial division (so) that we haven’t had time to look at residential,’ said Crenian. “I would say that within a year we will be very active in multi-family as long as interest rates stay about the same as now and that we’re able to get financing.”

The residential business will be focused primarily in Alberta and Saskatchewan, but the company is open to build anywhere if the right situation presents itself.

Redev’s strategy is to purchase retail properties that have potential for redevelopment or intensification. Crenian said several of its retail sites already fit that profile.

“I also look for rental potential as well,” Crenina said. “If there is empty space in a building, but if I buy it and I have the ability to fill that space. I’m going to be able to make some more return on that project.”

Expanding further into construction is the latest in a series of recent moves by Redev. In the fall, it announced the relocation of its Toronto office to 2602 – 2 Bloor Street West.

“This office relocation is coming at a great time for the company,” Crenian said at the time. “ReDev continues to grow and prosper, and we want our new office space to reflect that. Our new location will increase our visibility and enable us to accommodate our new and existing clients more effectively, as well as be closer to our financial partners.”

The new office is in downtown Toronto at the prime intersection of Yonge and Bloor Streets, steps away from the affluent Yorkville and Rosedale neighbourhoods.