Calgary City Council has paved the way for the Landowner Group partnership to seek approvals for a medium to high residential density mixed-use development in the Symons Valley sector. 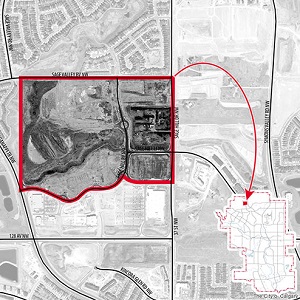 A partnership known as Landowner Group plans to build about 2,200 residences along with commercial and retail components in the Sage Hill area of north Calgary. (Courtesy City of Calgary)

The amendment to the Symons Valley Community Plan means Landowner Group – Genesis Land Development Corp., Anderson Builders Group and the City of Calgary – can proceed with securing land use and plan approvals for the project.

“The ASP amendment was needed because regional commercial land uses approved in 2007 no longer worked,” says Sargent. “There was no uptake on land, no purchasers interested, which was disappointing as the southern part of the development went well with attracting retailers Walmart and Loblaws.

“Reasons for the lack of interest included an incomplete road network and lack of residential population at the time. Competing nearby regional commercial developments such as Beacon Hill or CrossIron Mills had the advantage of completed infrastructure, including access to the Sarcee Trail interchange and progress on Shaganappi Trail.

Sargent says the approved plan amendments change much of the previously regional commercial component to a much better medium- to high-density residential development. This plan will allow a mix of four-storey apartments and townhouses across an area of land that provides stunning views over the coulee and across the development.

There is also potential for six-storey apartment development closer to the proposed transit hub. She says the City of Calgary has acquired land for a bus transit hub and a future Calgary Public Library branch.

The Anderson Builders Group also owns land on the site and is planning a mix of commercial and residential development.

“Genesis Land Development Corp. will commence detailed planning work with a goal to promote integration of a town centre which is envisioned to have excellent connectivity to residential development to the north and the existing commercial to the south,” says Sargent.

“The development will have excellent pedestrian and cycling connectivity, both facilitated by the existing and proposed regional pathway network as well as future pathways and trails within the development. A feature will be a pedestrian bridge across the coulee toward the future town centre. Opportunities for additional open space will be investigated.”

Community to house about 4,800 residents

The population expected within the site is approximately 4,800 in 2,200 dwelling units. Also planned is approximately 250,000 square feet of commercial development, including the town centre to service the local community.

“We’re working hard to ensure this area is very pedestrian-friendly. A pedestrian bridge built across the coulee will provide direct access to both existing commercial retailers and the town centre that’s going to be built,” says Sargent.

“And the town centre will focus on some of those amenities that are not present in the Sage Hill area just yet. So there will be more restaurants, more boutique stores and facilities people use on a daily basis without having to jump in a car and drive.”

Development is expected to begin in 2020.

The north part of Calgary has seen explosive growth both from a residential and commercial real estate perspective.

“Over the last two years we started to review the positioning of our land and where things were going to go,” says Sargent. “Studies showed that any additional commercial that we wanted to construct on our land would really need to be supported by further residential development but not necessarily of the 40-storey kind.

“So essentially the direction we decided on was to propose to the city the benefits of a multi-family development of medium- to high-density while retaining the town centre site. This will allow the continued development of a vibrant community that has great access and amenities.”