Campus Suites suffered a blow when The Arc in Winnipeg was the scene of a major fire during const... 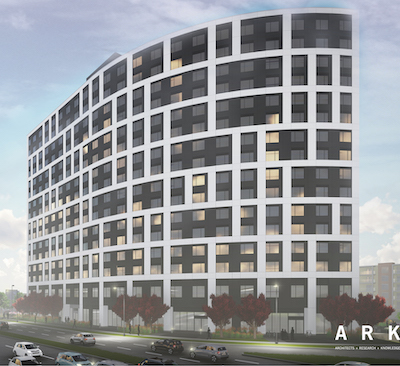 A construction fire has set back progress on Campus Suites’ The Arc in Winnipeg. However, the company has several student and co-living developments on the go across Canada. (Courtesy Campus Suites)

Campus Suites suffered a blow when The Arc in Winnipeg was the scene of a major fire during construction in late 2019, but the company is moving forward on several developments as it expands its student and co-living housing portfolio.

The Arc, a 570-bed, mixed-use, purpose-built rental student housing community at 2525 Pembina Highway, across from the University of Manitoba entrance, was scheduled to be completed in August. However, on Dec. 21, a couple of weeks before it was supposed to be topped off, building materials on the top floor caught fire and caused extensive damage.

While the building is fully insured, Campus Suites president Henry Morton told RENX the fire “has set us back quite considerably. We will unquestionably not be delivering this year.”

Morton said the fire is presumed to have been caused by arson and an investigation is ongoing.

The Arc’s suites will feature multiple bedrooms with extra-large beds, desks, electronic keys, high-speed Internet and a kitchen or kitchenette for residents. Amenities will include study lounges, a business centre, a gym, a communal kitchen for larger get-togethers, underground parking and multiple commercial businesses.

The Hub in Calgary

While The Arc suffered a setback, The Hub development in Calgary is on schedule for occupancy at the end of July.

The 509-bed, mixed-use, purpose-built rental student housing community is located between the University of Calgary and Southern Alberta Institute of Technology, making it a short walk for students at both schools.

The Hub’s suites will have similar features as those at The Arc. It will also include study lounges, a business centre, a gym, a communal kitchen and underground parking, as well as surface parking and multiple ground-floor restaurants with patios.

Aside from their proximity to campuses, The Arc and The Hub also have easy access to public transit so residents can get around the rest of the city.

“They really are the only purpose-built games in town,” said Morton. “They’re both well-done, well-constructed, well-thought-out, well-received buildings, both with spectacular views of their respective locales.

“Each one of them in its own way is transformative to the sub-market. Because they are the first instances of purpose-built housing, the response to both has been very, very strong. People appreciate the overall business model.” 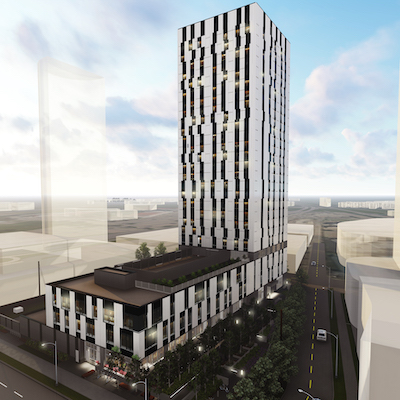 Campus Suites’ The Hub in Calgary, which is scheduled for completion in July. (Courtesy Campus Suites)

While The Arc and The Hub are aimed at students, Morton said recent graduates and others seeking a sense of community and less expensive housing options may be interested in the properties for a co-living arrangement.

“We’ve found that if we meld the co-living and the student components together, with the right age categories being represented in the building, they can all live harmoniously and can actually enhance the relationships of everybody there to build a bigger and better community.”

Opening up this co-living option can also backfill projects with a secondary source of residents if the buildings aren’t totally occupied by students.

“When we build community, we build retention,” said Morton. “People want to stay there.

“If we build retention, we build recruitment because people will want to live there. Then we get the rents we so badly desire and we get people who take care of our buildings better, because they’re appreciative of the environment in which they’re living.”

Morton has developed or co-developed more than 14,500 student housing and conventional bedroom units and 200,000 square feet of retail that have a combined value of more than $1.25 billion.

While Canadian student housing developments can match those in the United States, Morton said there are major differences between the two markets.

Even though there are few places in Canada, outside of Waterloo, Ont., where there are more than one or two student housing projects in a tight geographic radius of university and college campuses, Morton said there are only about 15 Canadian universities that Campus Suites sees as viable options to build near.

“In the States, there are umpteen opportunities. You can find gems all over the market. There’s not a 10-to-one ratio of opportunities that one would normally use as a metric for comparing the States and Canada.

“As a result, people can make a great living doing secondary or tertiary markets that we don’t even have here in Canada.”

Morton said much of the competition for off-campus student housing in Canada comes from “non-code-conforming housing where people have chopped up houses” and condominiums rented to students. Neither are purpose-built for students nor are they managed, a benefit of Campus Suites buildings.

While there’s competition for development land, some owners have approached Campus Suites directly about student housing projects so it doesn’t often get into bidding wars.

“It’s how you do things as a joint venture, where it’s win-win for everybody,” said Morton. “It’s about forming good relationships with people to achieve the best results.”

The Quad, an 812-bed, mixed-use, purpose-built rental student housing community on York University’s Keele campus in Toronto achieved full occupancy of both its residential and retail components in 2018.

Morton said construction of Phase 2 of The Quad, featuring 706 beds and located beside the existing two buildings, will begin this year.

It features a fitness centre, a television lounge, a game room, a movie theatre, a study area and parking.

The four- and five-bedroom suites are available to lease furnished or unfurnished.

Work will soon begin on the second phase of Foundry Lofts, which Morton said will have more than 500 beds.

Campus Suites is also starting work on a residence for about 300 students at Royal Crown Academic School, an international language high school at 4620 Finch Ave. E. in Toronto.

Finally, it hopes to start building a community of up to 278 single-family homes and townhouse units in Collingwood, Ont. late this year. While it’s a new field for the company in Canada, Morton has done plenty of similar lot-servicing in the U.S.

“There are a number of initiatives that are underway and in various stages of development,” said Morton. “We have a big program over the next several years that we hope to achieve across the country, from Edmonton and Calgary through to Toronto and, ideally, Halifax.”