Canada’s commercial real estate market is coming off an unprecedented year, but despite continuing favourable conditions it is late in the cycle and a slowdown is inevitable, Avison Young‘s 2018 forecast indicates. 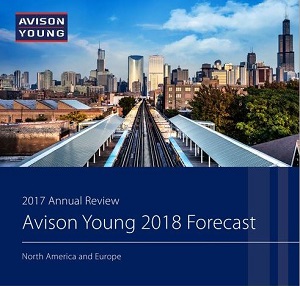 The company’s 2018 North America and Europe Commercial Real Estate Forecast says the Canadian sector has been experiencing healthy property market fundamentals across all regions and asset classes – supported by a stable economy which is the envy of G7 countries.

Bill Argeropoulos, principal, practice leader, research (Canada) for Avison Young, says in many ways 2017 was a record-setting year with investment volumes estimated at $32 billion and record-low office vacancy rates for Toronto’s downtown market at 2.7 per cent. The industrial national vacancy rate was a very tight 3.9 per cent.

“Despite favourable market conditions, there is a sense that we are late in the cycle and we all have to be prepared for a potential slowdown in activity.

“The commercial real estate sector is undergoing rapid change as a result of disruptive innovations in technology and occupier behaviour, which are confronting conventional wisdom among stakeholders. Different markets and regions will be impacted differently because of varying geography and fundamentals,” he told RENX.

“In extremely tight markets, such as the office market in downtown Toronto, tenants will find it extremely difficult to create negotiating leverage given diminishing opportunities in existing product. Across the country, traditional drivers of demand will be augmented – or in some cases, replaced – by tech firms.

“The real estate sector is having to re-evaluate challenges and opportunities in this technologically-transforming world – a world that Canada appears to be making a concerted effort to lead, rather than follow. It’s no coincidence that the likes of Amazon and Google are paying increasing attention to Canada’s markets and its growing profile as a global destination for tech workers, thanks to the country’s cultural diversity, strong employment figures, immigration and highly educated labour force.”

* An ongoing supply-demand imbalance pushed the vacancy rate in Canada’s 530-million-square-foot office sector up 20 basis points (year-over-year) to 11.8 per cent near year-end 2017. Vacancy was higher in five of 11 markets surveyed; four remained in single-digits, while five were below the national average. Calgary posted the highest vacancy (23.1 per cent); Winnipeg the lowest (6.6 per cent), and Waterloo Region the biggest change (+500 basis points to 16.6 per cent);

* Uneven demand and a healthy development pipeline will see vacancy rise in five of 11 markets and lift Canada’s office vacancy rate 40 basis points to 12.2 per cent by year-end 2018. Weighed down by Calgary and Edmonton’s struggles, a notable West-East divide remains. Western markets will finish 2018 with a collective vacancy rate of 16.1 per cent versus 10.1 per cent in Eastern markets. Four Canadian markets (Winnipeg, Toronto, Regina and Vancouver) are projected to be among the 10 lowest office vacancy rates in North America by year-end 2018;

* There was 12.5 million square feet  (48 per cent  pre-leased) of office space under construction across Canada near the end of 2017 – mirroring construction levels at year-end 2016. More than half is in Toronto, ranking the city sixth among North America’s most active development markets;

* Canada’s two-billion-square-foot-plus industrial market had a vacancy rate of 3.9 per cent – down 50 bps from year-end 2016. Despite a steady stream of development demand will remain strong, holding the rate below four per cent in 2018;

More than $32B in CRE transactions

The Avison Young report says 2017 was a record year for investment in Canada with an estimated $32 billion worth of property changing hands through mid-December, eclipsing the $28 billion in sales in 2016. Vancouver and Toronto were the hottest markets.

“Despite its relatively small investable universe, investors – both domestic and foreign – still find Canada an attractive destination for their capital,” says Argeropoulos. “Although investment has largely been directed towards Vancouver and Toronto, these cities’ high pricing levels have led to capital spilling over to other markets such as Montreal and Ottawa.

“The Calgary and Edmonton markets are starting to turn the corner, and their relatively higher yields compared with Toronto and Vancouver are attracting the attention of buyers without existing local exposure, who now have the opportunity to acquire assets at discounted prices.

“The country’s stable economy and respected position on the world stage mean it is regarded as a safe haven, without the geopolitical tensions found elsewhere in the world.”

Argeropoulos says the industrial sector is perhaps the strongest, exhibiting single-digit vacancy rates, stable demand and rental-rate growth. A diverse and growing tenant base, fuelled by accelerating e-commerce demand, is pushing the sector to adapt quickly as some markets face a decreasing supply of developable land.

Vacancy levels in most markets are half those of the office markets. Even with continued new supply, this tight vacancy is expected to persist.

“None of the sectors is particularly weak, but the retail sector is perhaps the most volatile as it is transforming the fastest and is constantly challenged to react to changing trends,” he says. “Stakeholders haven’t lost faith, and contrary to widespread belief, bricks-and-mortar is not going away, but is in the process of adapting to serve customers in the wake of technological advancement.”

By most metrics, Vancouver and Toronto top the list as the best CRE markets, with Montreal and Ottawa also garnering attention, says Argeropoulos.

“Although they have had their challenges, things are starting to look up in Calgary and Edmonton and this creates opportunities for stakeholders to capitalize on the improving fundamentals,” he adds.

“With so much attention given to the country’s larger markets, let’s not forget some of the smaller property markets – including Winnipeg, Regina, Lethbridge, Waterloo Region and Halifax – which all have reasons to look forward to some positive results in 2018.”

Top traded assets in 2017 in Toronto and Vancouver included: the $1.9-billion (50 per cent interest) office/retail portfolio (between Cadillac Fairview and partners Ontario Pension Board and Workplace Safety and Insurance Board) in Vancouver; Oakridge Centre in Vancouver for $961 million (between Ivanhoé Cambridge and QuadReal); the sale of a 50 per cent interest in Toronto’s Scotia Plaza for $682 million (between Dream Office REIT (D-UN-T) and AIMCo/KingSett Capital) and 700 University Avenue for $433 million (between Ontario Power Generation and KingSett), says the report.

Other big big deals included the sale of a 50 per cent interest in TransCanada Tower in Calgary for $257 million, Edgewater on Jasper in Edmonton for $191 million, Constitution Square in Ottawa for $481 million, and SNC-Lavalin‘s headquarters in Montreal for $173 million, says Avison Young.

It says potential assets anticipated to trade (or set to close) in 2018 include: the Hudson’s Bay Company‘s (HBC-T) 636,000-square-foot Vancouver flagship store; the 2.2-million-square-foot Bay-Adelaide Centre in Toronto; Cominar REIT’s (CUF-UN-T) portfolio of non-core assets outside of Quebec and Ottawa comprising 6.2 million square feet, which is expected to close in March, and to be followed by another round of core asset dispositions; and in Edmonton, the ICE District office towers (Edmonton Tower and Stantec Tower), totalling 1.3 million square feet of mixed-use space.