Canada remains a relatively stable investment market even as geopolitical and economic uncertainty in many parts of the world, combined with dramatic technological advances, make for a rapidly changing globe. 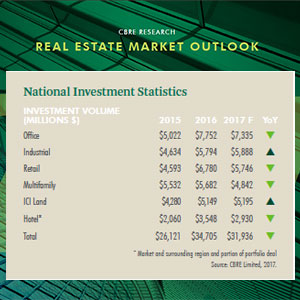 “Skittish capital is being driven to Canada,” CBRE Canada executive vice-president and executive managing director Paul Morassutti said in delivering an overview of the real estate industry to open the RealCapital conference at the Metro Toronto Convention Centre on Tuesday.

“Investment activity was at record levels in 2016, when every asset class outperformed its 10-year average. This activity included a record level of foreign investment, the vast majority of which was Chinese.”

Morassutti said the ongoing appetite for risk-averse assets has pushed capitalization rates for trophy properties in Vancouver and Toronto to record lows, and they now resemble yields in cities such as Paris, New York and London.

Canadian real estate investment trusts made a strong comeback last year from a weak 2015 and vastly outperformed the global market, delivering an unprecedented 18 per cent return. However, Morassutti pointed out the REIT industry is maturing and changing.

“After more than two decades of being almost exclusively asset acquirers, REITs are now focused on capital recycling, strategic development and de-risking their distributions and portfolios.”

While domestic pension funds and their real estate arms are selectively buying properties that rarely come to market, according to Morassutti, they’re also taking a similar approach as REITs.

“For the most part, rather than chasing acquisitions in a frothy environment, they have principally chosen to squeeze out higher yields by developing brand new product and repositioning assets.”

Morassutti stressed e-commerce and online shopping aren’t the biggest stories in retail, but the widening gap between strong and weak assets, retailers and owners is.

“Tier one flagship malls are performing extremely well. Virtually every major mall in Canada has recently renovated or expanded, while B- and C-class malls in tertiary locations are struggling, and some of them may not ever recover.”

Several top retailers are reducing their physical store counts and format sizes and focusing on their best locations, which is hurting malls in weaker areas and increasing the adverse impact of e-commerce on such sites.

One of the ways in which shopping centres are trying to lengthen customer dwell time is through increased experiential retail — including entertainment and food offerings — that can’t be replicated online.

Morassutti pointed out that Canada has considerably less mall space and its shopping centre productivity is well ahead of the U.S., so the former doesn’t have the “dead mall phenomenon” that plagues its southern neighbour.

Industrial has major role in retail

“For every $1 billion in online sales, an incremental one million square feet of distribution space is required. This has delivered an additional wave of demand to a sector that was already very stable.

“It’s not just mega distribution facilities that I’m talking about. It’s now evolving into a broader spectrum of space requirements, including smaller local fulfillment buildings located within close proximity to urban centres as last mile delivery becomes ever more crucial and as the logistics of dealing with returns — which can be three times higher than the return rate at physical stores — becomes ever more important.”

While the technology sector has been the biggest driver of office space demand, Morassutti cited a study that said automation will kill back office positions in the financial services industry. That, however, should be offset by new jobs in software development, data science, digital media and creative industries.

“Finance and technology are increasingly becoming more integrated and the finance sector is expected to act much more like technology firms in terms of innovation, employee retention and attraction, and workplace services,” said Morassutti.

“The challenge for office owners probably won’t be that you won’t have any tenants, it’s that tenants may not want space the way you want to give it to them.”

Oil prices are firming up, the unemployment rate is dropping and confidence is gradually rebuilding in Alberta, according to Morassutti, who mentioned that the Canada Mortgage and Housing Corporation is forecasting a decline in residential vacancies through 2018.

“The energy sector does look to be firmly back on the path to recovery, but the path is proving to be a long and bumpy one. The impact of that on the office sector will be minimal, as both hiring and leasing will lag just as we’re adding an additional three million square feet.

“So while there is still clearly risk, don’t write off Alberta. If there’s one place left in Canada where there’s real value and where an investor can hit a home run, it’s Alberta — especially in the office sector.”

Multi-family on the rise

Younger Canadians are foregoing home ownership because of affordability issues or lifestyle choices, while retiring baby boomers who need the equity from their homes downsize from houses to rental accommodations. As a result, Morassutti expects that the recent sharp upturn in the construction of purpose-built rental apartments will only increase.

“Condos have been the de facto rental product in most cities, but there’s now a growing cohort who would prefer to be in a professionally managed building rather than dealing with a condo owner in another country where you have no security of tenure in a building that quite often resembles a frat house.”

“Since the mid-1990s we’ve seen stronger ownership, lower levels of debt, capital market discipline, et cetera,” Morassutti said while wrapping up his presentation. “The net result is that real estate has evolved into a much stronger and less volatile asset class.”

He warned, however, that the combination of a slow growth environment, political unrest and accelerated technological change is introducing a layer of risk and uncertainty that the Canadian real estate industry hasn’t before seen to this extent.

“I’m not trying to be an alarmist. My point is simply that we are witnessing an acceleration of big changes, both positive and negative, that will produce both winners and losers. More than ever, you need to understand these shifts in order to develop appropriate strategies.

“Gone are the days where you could be a passive owner. Today you have to have deep sector expertise and you really have to understand your tenants. You have to have a well-informed and holistic view of the market and access to excellent research. These are the things which will help insure success or, at the very least, survival.”