Canada hasn’t seen a surge in apartment construction like the one it’s experiencing now since the 1960s, and five major players speaking at the Toronto Real Estate Forum expect a continued strong performance for the purpose-built rental sector for the next few years. 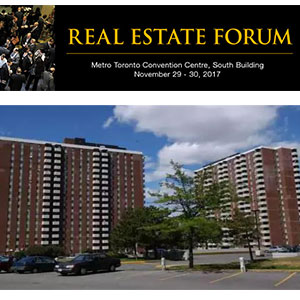 “People left the rental market for lower interest rates in home-buying in the ‘90s, and it became really rough in the 2000s,” said CAPREIT chief operating officer Mark Kenney, who moderated a panel on the subject on Dec. 1 at the Metro Toronto Convention Centre. “Now what we’re seeing is a return of a culture of people renting apartments.”

“People want to live in a downtown urban location that’s close to work and close to amenities and, in many cities, people are being priced out of the ‘for sale side’ so renting is becoming a choice,” said Brian McCauley, president and COO of Vancouver-based Concert Properties, a developer that’s built and manages 5,250 residential rental units in British Columbia, Alberta and Ontario.

There are 4.3 million households that rent in Canada and the supply of new purpose-built rental apartments, which makes up a very small percentage of that total, isn’t keeping up with the demand. Starlight Investments founder and chief executive officer Daniel Drimmer said the value of apartment buildings will continue to rise along with demand since there’s limited product available.

“A lot of people want it and the sellers are becoming less and less. We’ve also been through a tremendous amount of consolidation over the last 12 years here in Canada and, once it gets into institutional or public companies’ hands, it usually doesn’t trade much. It’s much, much harder to buy right now and the competition on the buy side is very fierce in core markets.”

“I think the apartment space in Canada is so small that it’s virtually impossible for a new player to enter this market,” said Drimmer, whose Toronto-based company owns about 24,000 apartment units in around 400 buildings Canada.

“The groups that have been around and done the consolidation have the reputation in the marketplace and have the speed and the turnaround times to do the deals. The brokerage community has to feel comfortable when they bring you a deal that you’re going to be there to close and won’t mess around.”

Vancouver apartment buildings have changed hands with capitalization rates in the two-per cent range this year and it’s expected that some in Toronto could follow. While Concert just builds new product and isn’t competing for acquisitions in this compressed cap rate environment, McCauley said he’s puzzled how companies can justify buying in such cases.

Drimmer, however, said Starlight looks beyond cap rates and can make the numbers work when using a five- to seven-year time horizon after buying older buildings and fixing them up to add value and increase rents by $100 to $200 per month. Starlight is targeting Toronto and Vancouver and cities within an hour drive of them for future acquisitions.

Halifax-based Killam owns approximately 14,000 apartment units in around 170 buildings in Atlantic Canada, Ontario and Alberta valued at about $2 billion. President and CEO Philip Fraser likes the Greater Toronto Area as well as nearby cities including Kitchener-Waterloo, Cambridge, Milton and Mississauga for future investment and development. And despite struggling in Alberta at the moment, he believes that Edmonton and Calgary will turn around and have bright futures.

“For the next couple of years, our strategy is to continue to look for acquisitions in markets that we’re in, but also continue on our pipeline of our own developments,” said Fraser. “We just finished one a couple of months ago and have two in the ground right now, and we’re in the planning stages with another four.”

McCauley said many Canadian markets are underserved by purpose-built rentals, but there’s a challenge to secure land at reasonable rates and to get through the approval process in a timely manner so that they can be delivered.

Killam has been very active in London and Halifax, which Fraser said has become a strong rental market due to: an aging population downsizing to apartments; the development community graduating from building smaller wood-frame apartments to larger concrete apartments; and an increased emphasis on downtown living.

“The condo market definitely opened up the door to new rental construction because it lifted up the rents in purpose-built product,” said Kenney, whose REIT owns interests in more than 41,000 residential suites.

He added that the quality of new rental apartment buildings is so good that they’ve taken some of the stigma away from renting and is changing Canadians’ attitudes to more like those found in Europe, where renting is more popular. It was acknowledged by everyone on the panel that people are willing to pay more for better rental units in buildings with strong amenities.

“Consumers are becoming far more sophisticated in terms of choosing to rent in condos or purpose-built multi-family apartments,” said Morash, whose company manages almost 14,000 units in more than 70 buildings valued at about $2 billion.