The Canadian hotel industry is still firing on all cylinders, having gained strength in each year but one in the current cycle that began in 2011. 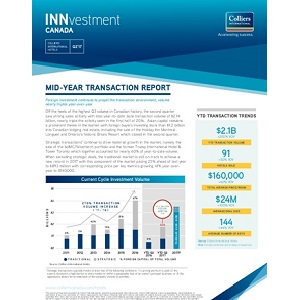 “Several factors beyond regular buyer-seller-lender dynamics have come into play that have dramatically enhanced the appeal of the country’s lodging sector and provided promise for continued activity,” said Colliers International hotels senior analyst Fraser Macdonald, who was involved in creating the company’s “INNvestment Canada Q2 ’17” report.

“Four themes that have enhanced liquidity in the lodging transaction market include: shifts in currency markets; capital flight from primarily mainland China; a search for risk-adjusted returns by both domestic and internationally focused investors; and strong operating performance witnessed in most markets across the country.”

Several statistics illustrate the strength of the Canadian hotel market:

Strategic transactions continue to drive material growth in the market, namely the sale of the British Columbia Investment Management Corporation (bcIMC)/SilverBirch Hotels & Resorts portfolio and the former Trump International Hotel & Tower Toronto, which together accounted for nearly 60 per cent of year-to-date volume.

The bcIMC/SilverBirch portfolio consisted of 25 properties with 6,757 rooms, largely located in city centres across the country, which provided exposure in Canada’s major markets. The portfolio was sold in February for $1.1 billion to Hong Kong-based Leadon Investment and ranked among the largest hotel transactions in Canadian history.

The former Trump International Hotel & Tower Toronto was acquired by InnVest Hotels in June for undisclosed terms. InnVest, one of Canada’s largest hotel owners, was previously publicly traded before being taken private by Hong Kong-based Bluesky Hotels and Resorts in 2016. The 211-room hotel is operating as The Adelaide Hotel and will be rebranded as the St. Regis Toronto following significant renovations in 2018.

Traditional market ahead of last year

When excluding strategic deals, the traditional market is still on track to achieve strong results in 2017, with this component of the market pacing 25 per cent ahead of last year at $893 million. The corresponding price per room grew by 41 per cent year-over-year to $140,000.

“Metro areas such as the Greater Toronto Area, Vancouver and Montreal have been the most sought-after, with significant demand for assets in both the downtown, airport and suburban submarkets,” said Macdonald. “Other top investment markets include Ottawa, Calgary, Victoria and rural Ontario.

“Hotels in major markets benefit from a consistent leisure and corporate demand base and have seen several years of strong operating performance. Stiff competition and lack of available product have helped drive interest in secondary markets as investors widen their search for yield.”

Atlantic Canada saw renewed interest from investors, with the $17-million sale of the Residence Inn Halifax Downtown from HHC Hotels LLC to Manga Hotels setting a new $184,800-price-per-room record for the region.

Buoyed by strong growth in underlying real estate values, more than 60 per cent of the closed transaction volume in British Columbia was acquired for redevelopment or conversion to alternate uses.

The most active investors

The traditional market saw minimal buy-side demand from public and institutional groups, which were mainly focused on larger strategic acquisitions, according to the report.

Asian capital remains prominent, with foreign buyers investing more than $1.2 billion into Canadian lodging real estate, including the $6.98-million sale of the 142-room Holiday Inn Montreal – Longueuil and the historic The Briars resort in Georgina, Ont., which sold in the second quarter for an undisclosed price.

Forecast for rest of year

With strong year-to-date sales activity and several deals in the transaction pipeline, Macdonald estimates the hotel market sales volume will come in between $3 billion and $3.5 billion for the full year.

“Despite tapering from the $4.1 billion registered in 2016, our forecast is well above the current cycle average of $1.9 billion and we expect continued strong pricing, particularly in major markets.”