Daily headlines of doom and gloom in Canadian retail might be overblown, according to panelists discussing the sector at the 14th annual RealREIT conference in Toronto on Thursday. 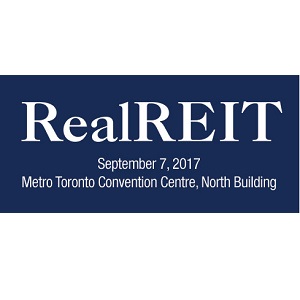 “Retail has always had turmoil,” said OneREIT CEO Richard Michaeloff (ONR.UN-T). “It has always changed. You look back over time, retailers have come and gone. You had downtown stores and then suburban stores. You had Walmart come in . . . there has always been lots of change.

“The key thing is for landlords and property owners to stay focused and be adaptable and to recognize trends.”

That doesn’t mean Canadian retail property owners and managers have their heads in the sand. They see the rise of ecommerce and technology, and how these “disruptors” are affecting their traditional business models.

Statistics presented by moderator Lou Iafrate of Altus Group also showed that in most major shopping centres in Canada vacancy rates remain below five per cent.

“The bottom line is we do have reasonable level of occupancy in this country,” said Clow. “We do have competitive retailers and especially in our world, which is grocery-anchored strip shopping centres, primarily, the grocery industry though it is under siege in the press, is actually quite strong and exceptionally competitive versus Amazon.”

As with any business evolution, there are winners and losers. CT REIT (CRT.UN-T) president and CEO Ken Silver said it’s not hard to pick out the companies which are adapting, surviving and, in some cases, thriving.

Technology investment paying off for retailers

“If you want to understand the winners and losers in the retail space, it really comes down to the investments retailers are making in technology. It’s not just e-commerce, and it’s not just the website.

On the other side of the coin are the struggling businesses, and Silver said several headline-grabbing failures recently have one similar factor in play.

“A lot of the retailers who are failing in the U.S. were bought by private equity and leveraged out . . . those retailers that didn’t have the financial flexibility to reinvest because they were carrying huge amounts of leverage are most of those that have failed.”

One of the most high-profile is Sears, which has suffered massive losses north and south of the border and is trying to restructure through store closings and layoffs. Plaza Retail REIT (PLZ.UN-T) president and CEO Michael Zakuta also cautioned people to consider the root causes of Sears’ troubles.

“Sears’ demise has very little to do with e-commerce,” Zakuta said. “I hear that all the time, I get frustrated hearing that. I think it has everything to do with having a very poor strategy and absolutely terrible execution year after year after year. Eventually it has to catch up to you, and it did.

“Plus, we talked earlier about the private equity guys milking businesses, well, there’s another example.”

Failing businesses also don’t help the properties in which they reside.

Identifying why businesses fail, however, is only part of the issue. The property owners still must deal with the fallout. Sanderson used Target’s Canadian foray as an example.

When Target bailed out of Canada, it left 16 million square feet of retail space behind.

“For the most part, the reaction in the landlord community, and we were living it every day in 2015, was, ‘Great, can’t wait to get my hands on the real estate because it’s worth $20 per square foot instead of $3.’ ”

Opportunities can be found among the wreckage

Sharp managers can also find opportunities among the wreckage. Silver talked about a sale and leaseback agreement which CT REIT completed with Sears for its Calgary distribution centre.

“Our interest in the property was, the Sears DC is actually right next to Canadian Tire’s distribution centre in Calgary and we knew that Sears had an easement onto the Canadian Pacific intermodal rail yard because Canadian Tire had one as well. We just thought it’s fabulous real estate. ”

If Sears goes under, CT REIT has a premium piece of property available for a new tenant.

Shopping centre owners have adapted to retail closures through a variety of strategies. Some former Target or Zellers stores, for example, have become home to new retailers both large and small, others now host office or other commercial tenants, fitness centres, entertainment venues, etc.

Michaeloff cited one example in Toronto.

“We ended up replacing them with two tenancies. One was a 45,000-square-foot tenancy for the City of Toronto, more of an office-type use. Three hundred employees working there with additional client traffic another 400 to 500 estimated per day.

“The other one-third of the old Zellers store we ended up turning into a Planet Fitness. So, it really changed the dynamic of that former space.”

Technology and e-commerce also create opportunity. Silver said while some media paint the retail evolution as “bricks and mortar vs. e-commerce”, what is happening is much more complex.

And, remember, Amazon just made a major purchase. Of Whole Foods Market. A bricks and mortar operation.

“That’s an Achilles heel for them. They have to get bricks and mortar. That is what Whole Foods represents. That’s actually a reinforcement of the benefits of having bricks and mortar locations.”

Clow then seemed to sum things up for his fellow panelists.

“You just need to be working with your retailers to adapt very quickly and make your centres successful through that accelerated change,” he said, adding having a portfolio of strong retail locations allows for flexibility in repositioning the assets.

“The other thing, and we are into this in a big way, is the opportunity to maximize the current value of the sites.”