What Canadians want in a national housing strategy

Nov. 22 was National Housing Day in Canada, and the federal government used that as a platform to release a report titled “What We Heard,” an analysis of consultation feedback on what Canadians want in a new national housing strategy. 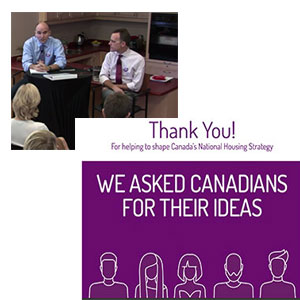 “Canadians agree that the national housing strategy must include measures to address the pressing housing needs of lower income Canadians and vulnerable Canadians,” said Duclos at an event held at Ottawa’s Beaver Barracks that attracted representatives of various groups with a vested interest in the strategy.

“We need to end homelessness and make sure that seniors and lower income families can afford shelter as well as food and other necessities. It’s about more than bricks and mortar. It’s about giving people the best opportunities to succeed and build better lives for themselves and for their families and for their communities.”

“What We Heard” report

The Conference Board of Canada compiled the “What We Heard” report, which details the feedback received from an extensive consultation process that began in late June and involved an online survey, expert and stakeholder roundtables, focus groups, town hall meetings, written submissions, social media channels and the Let’s Talk Housing website. The input received from a broad range of players — including individuals and organizations working in the housing sector as well as representatives from national indigenous groups — will help form part of the national housing strategy that the federal government plans to release next year.

More than 150,000 Canadians have to stay in an emergency shelter every year and close to 35,000 experience some form of homelessness on any given night. One in five indigenous people who live off reserve are homeless or live in overcrowded, unsafe or inadequate housing. Three-quarters of the rental buildings in Canada are more than 30 years old, and many are in poor shape and in need of costly repairs.

With sobering statistics like these confronting them, it shouldn’t be a surprise that Canadians expressed a desire to: help those in the greatest need; eliminate homelessness; ensure that people have housing that they can afford and that meets their needs; see flexible housing options that meet diverse and changing needs; and have governments that enact housing policies and programs that centre on people and place.

The Liberal government’s most recent budget allocated $2.3 billion for new short-term funding for investment in affordable housing over the next two years to improve housing conditions for low-income Canadians, including those in First Nations and Inuit communities. This included a new program to offer low-cost loans to developers to build as many as 10,000 rental units.

The budget also included a separate plan to spend $208 million over five years to create an “Affordable Rental Housing Innovation Fund” that would test new approaches to spur development of affordable housing, such as housing models that have a mix of ownership and rental units. A call for proposals was launched in August.

“Much more needs to be done and that’s why new approaches are needed,” said Duclos.

Duclos said he’ll work with other federal cabinet members while harmonizing efforts with provincial, territorial and municipal governments to come up with some of these new approaches while considering factors including safety, social inclusiveness, public transit and environmental challenges.

“We need to strengthen the capacities of housing providers to promote innovative financing models that will be better able to support the development of new affordable rental housing,” said Duclos.

The report suggests several ways that may be able to ease escalating prices that are keeping people on the sidelines and unable to afford adequate housing. They include:

Developing new equity or low-cost and flexible financing models partnering private developers and non-profits to build more rental housing was encouraged. While focusing on affordable rental housing is important, building higher quality rental housing can also create vacancies at the lower end of the market while meeting the needs of middle and higher income households.

The report suggests reforming tax policy to stimulate new purpose-built and secondary rental supply. This could include tax exemptions or deferrals on capital gains tax being offered on the sale of new rental buildings, applying tax exemptions for construction and repairs, and offering tax rebates for the creation of secondary rental units.

The report also suggests facilitating access to government-owned lands at a lower cost for the construction of affordable housing.

“Canadians expect the government to make the needed investments in housing to bridge the gaps between those who can access good housing and those that cannot,” said Duclos.

CMHC has a legislated mandate to conduct research on housing conditions. Feedback published in the report says more and better data is needed to understand housing conditions and the housing needs of Canadians in order to develop informed and cost-effective policies, programs and initiatives.

The report suggests that there are gaps in Canada’s housing data that’s hindering the ability to identify and address supply gaps, foreign ownership, vacancies and affordability issues. It was also suggested that there’s a lack of robust data on mortgages, the supply of family-oriented housing by price-point and location, current and future demographics in various markets, and other aspects of home ownership with which to create targeted, long-term strategies.

CMHC is in a unique position to support innovation and demonstration projects to model and prototype best practices in housing design and delivery. Enhancing this research capacity in coordination with other investments designed to grow non-government housing research could provide the impetus needed to fill data and information gaps and advance housing policy development and decision-making processes.

Siddall said on Tuesday that he meets Duclos regularly to discuss housing issues and that CMHC will deliver details of its plans to address data and research gaps to the federal government at the end of this year.

It was suggested in the report that CMHC could use its financial tools to support the development and renewal of affordable and sustainable housing and communities. Possibilities included direct lending to individual projects, making equity investments in support of innovation, supporting the creation of a housing bank and developing new products to help first-time homebuyers.

Social housing is a necessary support for the approximately 1.6 million Canadian households unable to access market housing that meets their needs and that they can afford. It includes both low- and mixed-income rental housing owned by governments, non-profits or cooperatives. The federal government supports more than 550,000 households living in social housing that’s administered under long-term agreements with provinces, territories, municipalities and housing providers.

Social housing agreements and the funding they provide will all have expired by 2038, according to the report. Some social housing providers won’t be able to continue without renewed funding, putting Canadians who rely on their reduced rents under increased financial stress and greater risk of homelessness.

The report suggests that a financing or CMHC lending authority could provide low-cost financing and investment for the social housing sector, which would help reduce development and redevelopment costs and yield new opportunities for investment.