A prime piece of Toronto lakeshore property is about to get a revitalization from the Canderel Group of Companies. 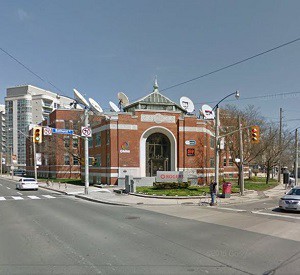 This property at 545 Lake Shore Dr., West in Toronto’s West Harbourfront district has been purchased from Rogers by Canderel (Google Street View image)

The purchase price was not released.

“545 Lake Shore and the urban lakeside community in which it is located offer our company yet another opportunity to bring positive change to one more iconic Toronto neighbourhood through distinctive design and smart urban planning,” Canderel’s chief operating officer Ben Rogowski said in a release announcing the purchase.

“With an unparalleled location, which already provides a host of residential, commercial and recreational amenities, we are confident that we will be able to create something truly distinctive in this lakefront community.”

The 1.8-acre site is bound by Lake Shore Boulevard West, Bathurst Street and Queens Quay. It sits just a short walk from the downtown Toronto Billy Bishop Airport at the western edge of the Quay.

It is considered one of the prime development sites available in the West Harbourfront neighbourhood, ripe for intensification.

It is currently the site of a low-rise Rogers Media office building.

“Canderel has always successfully identified strategic sites in Toronto” Rogowski said. “We have already begun developing an initial vision for the revitalization of 545 Lake Shore, and we look forward to presenting our plan shortly.”

The location will also benefit from an ongoing, $128-million revitalization of the avenue, which includes wider granite sidewalks, separated bike paths, and additional landscaping improvements.

An award-winning developer with projects across Canada, Canderel is in its 43rd year of operations. While its focus was traditionally the Montreal market, Canderel has become more of a player in Toronto in recent years. It has marketed, sold and delivered more than 7,500 condominium suites in Ontario.

It has been heavily involved in the revitalization of the city’s King West neighbourhood, and is responsible for such high profile projects as the Massey Harris Lofts, DNA1, DNA2 and DNA3 condominiums.

Canderel is building its latest project, YC Condos, close to College Park. YC was the city’s fastest selling project of 2015 and was honoured with the Project of the Year (High Rise) award during the 35th Annual BILD Awards.

It is also working with the City of Toronto to complete a redesigned three-acre urban park in the heart of the neighbourhood.

Canderel also landed a major deal in B.C. in mid-2016, taking on the role as property and leasing manager for Vancouver’s Bentall Centre.

The four-tower, 1.4-million-square-foot office and retail complex is located in the downtown core and houses tenants such as Bank of Montreal, Blakes, CIBC and Deloitte.

Canderel is also involved in projects in Ottawa, Calgary and Edmonton.