CBRE Hotels has made two new appointments and its continued growth has made it the largest and most comprehensive hotel brokerage and advisory group serving the hospitality sector in Canada. 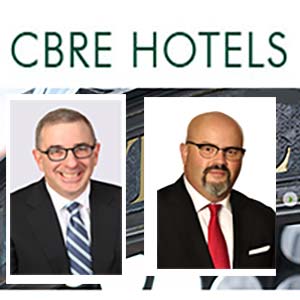 Scott Duff has joined the division of CBRE Limited from Starwood Hotels & Resorts Worldwide and will serve as Western Canada vice-president. He’ll also have national responsibilities along with Marc-Aurele Mailloux-Gagnon, who was hired as Eastern Canada VP last year.

“I was attracted to the opportunity to leverage skills and the network that I’ve been building up for 25 years or so, and ones that I thought were pretty portable to this role,” said Duff, who served as development VP with Choice Hotels Canada between 1997 and 2005 before joining Starwood (right in image).

“Instead of trying to create value through branding, as I continue to settle into my role here the conversation is going to be more about creating value through transacting real estate.”

Ray Chan has also been brought on board from Royal LePage as a sales associate who will be focused on hotels and resorts valued at under $10 million. He’s also fluent in Cantonese and Mandarin and will enhance the team’s relationships in China and across Asia.

Michael Beckley left his role as senior VP of development for Marriott International in Canada to become director of CBRE Hotels in May.

“Within the team now, we have considerable depth beyond straight transactions,” said CBRE Hotels executive VP Bill Stone (left in image). “The skill sets that Scott, Michael and Marc-Aurele have are adding to the sales process that helps both sellers and buyers.”

CBRE Hotels’ growth was further fuelled last August by its acquisition of PKF Canada, an advisory, consulting and research firm specializing in the Canadian hospitality and tourism industries. It purchased PKF Consulting USA, which provides similar services for the United States and global hospitality sectors, the previous July.

CBRE Hotels works with all types of hotel owners, from small private operators to large public companies and pension funds, and has been involved in deals in most major and secondary markets across Canada.

“There are close to 40 hotels worth in excess of $1 billion that we’re either marketing or have under contract,” said Stone. “We’re active and that’s consistent with levels that we did transact last year, when there was just over $1 billion in activity from 37 hotels that were traded.”

“The primary focus of a lot of investors is Toronto and Vancouver,” said Stone. “Ontario alone has seen about 70 per cent of hotel investment activity, and half of that is in the GTA (Greater Toronto Area).

Investment interest from around the world

Investment is coming from Canada, Asia, the U.S. and Europe, as Stone says the country is “perceived as a safe haven with a very strong and dynamic hotel market from an operations standpoint.”

While there’s some weakness in Alberta and parts of Atlantic Canada, Stone’s Canadian hotel market prognosis is generally positive and he foresees just a small drop in activity for next year.