As Canada’s economy gained strength through the first half of the year, national capitalization rates compressed across all sectors except hotels. 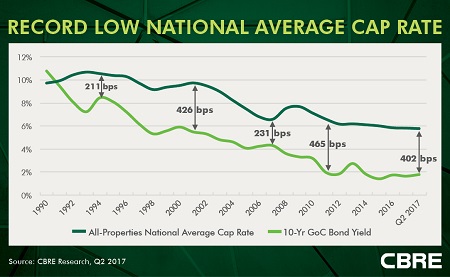 That may be coming to an end, however, according to Paul Morassutti, executive managing director of CBRE Canada, which just issued its “Q2 2017 Canadian Cap Rates & Investment Insights” report.

“Competition for the best quality assets continues to be fierce and further cap rate compression is conceivable,” he said. “But for the most part, with interest rates finally reversing direction, we expect cap rate movement to moderate.”

Foreign investment has contributed to driving cap rate compression in Vancouver and Toronto, with some activity in Montreal, but it’s had little impact on smaller markets.

Office, land and hotels seem to be the asset classes of choice.

Morassutti, however, doesn’t see foreign investment skewing commercial real estate values as it has to some degree in the residential sector in certain cities.

“On the residential side, in Vancouver and Toronto, certain locations and projects were heavily skewed by foreign investment. I don’t think there is a similar parallel on the commercial side, even though foreign activity surged in 2016.

“Canada looks good on a global basis and foreign buyers seeking capital preservation found us to be very attractive. With the capital controls being put in place in China, it will be interesting to see how the balance of the year plays out.”

No Trump factor in manufacturing sector

Backed by a thriving Canadian manufacturing sector, record low availability rates and an extremely tight supply of quality assets, prices for industrial assets rose in most markets and cap rates compressed significantly in the second quarter.

“Solid GDP growth, a supportive Canadian dollar and, most importantly, a surge in e-commerce-related leasing demand have been the primary factors,” he explained.

High housing costs have translated to strong investor demand for multi-family assets, and cap rates have dropped for class-A and -B high-rise and low-rise properties.

While Vancouver and Toronto remain the most attractive markets for multi-family investment, extremely tight yields in those cities are making investment in the secondary markets of Alberta and southwestern Ontario increasingly attractive.

Investor interest should persist into the second half of the year as the lack of a significant construction pipeline will keep multi-family vacancy rates low while rising housing prices will continue to place upward pressure on apartment rental rates, according to the report.

“Multi-family cap rates are heavily influenced by the spread between in-place rents and market rents. As market rents increase — and in a market like Toronto they have risen considerably in 2017 — the rental upside is even greater. Investors will always pay more and accept a lower going-in yield when upside is greater.”

Divide widens between class-A and -B office

A growing division between class-A and -B office assets has been evident over the past few quarters, and investors continue to compete over the limited supply of well-leased downtown core assets while avoiding lower-class properties in less desirable areas.

The national average cap rate fell in every retail asset class except high street during the quarter. The largest compressions were felt in the regional, strip and urban streetfront sectors, which fell by five, six and six basis points respectively.

Despite the shifting retail landscape, the report says there continues to be strong demand for well-situated urban properties across a variety of markets.

While hotel cap rates didn’t move from the first quarter, the asset class is still performing well based on the low Canadian dollar, strong business landscape and increased tourist visits across the country.

Toronto and Vancouver continue to be the primary investment markets and have the lowest cap rates in the downtown full service, suburban limited service and focused service hotel classes. However, as yields in those two cities continue to tighten, the comparatively high yields in secondary markets are expected to be more appealing.

Across all asset classes, Calgary has emerged as an alternative for buyers that may be put off by record high prices in Toronto and Vancouver.

“Calgary provides a rare opportunity to buy at well below replacement cost,” said Morassutti. “Nerves of steel and a longer-term investment outlook are required, however.”