Centurion has five-year plan to triple its assets

Centurion plans to more than triple its assets in five years, mainly through investing in apartment buildings in the U.S. and increasing its debt investments, says Greg Romundt, president and CEO of Centurion Asset Management. 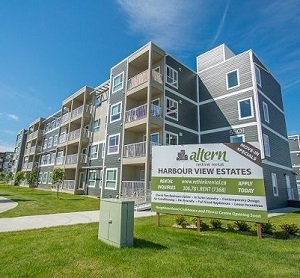 “We’re currently just short of $1.5 billion in assets and our plan is in three years to get to $3 billion and $5 (billion) in five,” he says of Centurion, the asset manager of Centurion Apartment REIT and Centurion Real Estate Opportunities Trust. The company also owns Centurion Financial Trust and provides mortgage lending, equity/joint venture financing and corporate financing.

Centurion REIT has 5,700 apartment units in 45 apartment buildings in Canada and is about 80 per cent Ontario-based. In addition, Centurion operates student housing under its The Marq banner in Montreal, London, Ont., and Waterloo, Ont.

Romundt says high prices, a competitive market in Canada and a desire to take advantage of opportunities down south are among the reasons the REIT has looked stateside.

“I think we got to the point where we said, ‘I don’t know how much more we can grow in Canada at today’s prices, so we need to look south of the border.’ ”

Centurion has “done a couple of transactions” in the U.S. It is primarily interested in the southern states but would look elsewhere as well.

“The primary thing that we’re looking for is partners. We’re not looking to go there by (ourselves). The U.S. is a huge market, so I think there are a lot of opportunities there and there’s some really good partners for us to potentially execute with,” he says.

Once it finds a site and a partner it likes, “we’ll build something with the view to keep it long run. We’re moving tentatively because the most important thing for us is finding quality partners that we’re happy with.”

The REIT is serving its unitholders by diversifying the portfolio into other markets, he says. In addition, “I just like building new businesses,” says Romundt, who founded Centurion. “Finding new ways to challenge myself is just interesting to me.”

Romundt notes the REIT bought only one property in the 2017 fiscal year. In late April. it bought a 60 per cent interest in Harbour View Estates in Regina, an apartment complex comprised of four, four‐storey buildings with 208 units.

“In terms of actually developing things in the market with third parties either direct or in the broker market – zero. It’s very, very tough.”

He notes the REIT has been priced out of many deals. “It’s not that there’s nothing for sale; I have a very difficult time justifying the prices asked and paid.”

The fact that cap rates are very low “just makes it harder to buy.”

“If you believe as I do that the current rental dynamics will stay in place, then yes you can model it out that you can make adequate returns,” says Romundt. “The issue is that it’s just not the way we tend to buy. I like to buy things at a deal that actually makes sense as is, because the future’s uncertain.”

Romundt says that since the risk-reward metrics have not made sense for Centurion to do much buying, it has been much more focused on lending.

“The risk-return is far better on the lending side than it is to buying at these kinds of prices.  We would love to be able to buy stuff, but we’re trying to stick to the discipline of not overpaying.”

Centurion is also seeing opportunity in development and has a number of projects in the pipeline. “If you want product today at reasonable price, you’ve pretty much got to develop it.”

The REIT is working on some intensification projects at properties it owns in Kitchener, Ont., and new apartment construction developments in Waterloo, Victoria, Edmonton, Calgary, Regina and Winnipeg for completion this year and next.

Romundt notes Ontario government moves have led to a restriction of supply in apartment rentals. Ontario tenants tend to stay in place, fearing a move will lead to a substantial rent increase elsewhere.

The reduced turnover has resulted in fewer available units to rent and an enormous tenant demand – hundreds of calls for each available unit. Whereas tenants used to call a few weeks in advance, they now have to look months in advance to have a chance at finding an apartment.

He adds many Centurion projects originally slated as purpose-built apartments have been switched to condos.

“Condo prices are just skyrocketing and you can get paid much more to sell them as condos than their economic value as apartments,” says Romundt. “We’d love to be able to build and keep them, but the values are so high as condos you’d actually almost have to have your head examined to want to keep it at the price someone’s willing to pay for it.”