The massive Southlands master-planned community in Tsawwassen on B.C.’s West Coast has been a lon... 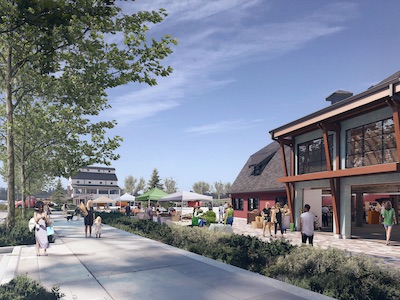 Artist’s conception of the Market Square at the Southlands development in Tsawwassen, B.C. (Courtesy Century Group)

The massive Southlands master-planned community in Tsawwassen on B.C.’s West Coast has been a long time in the making. In fact, developer Century Group thinks it may have the longest application history in the province – perhaps even anywhere in Canada.

However, the project is finally proceeding. It will eventually include 950 homes on the 530-acre site, including 275 acres of publicly owned Southlands Farm, a 50-acre Southlands Community Farm with community allotment gardens and small-scale artisan farming, over 100 acres of parks and natural areas, and a market retail square.

Sean Hodgins, president of New Westminster-based Century Group, said the land was subject to “quite a long community debate on its status and its future.”

“The genesis of it in part was my mother’s side of the family were farmers in Delta. They’ve since retired after four generations of farming  . . . I like to think I had a very big appreciation for what was involved in agriculture.

“I certainly was appreciative of the fact it’s been a very topical thing for many years – this sense of loss of people with this connection to agriculture. Kids don’t even understand where potatoes come from.

“But, how do we create a community that is focused, celebrates and integrates agriculture?”

The market square will be a retail area including a farmer’s market.

Southlands Farm will be one of the largest community-owned farms in North America. It is designed to provide a unique opportunity for residents to enjoy locally grown food, support farmers, increase the local food supply and connect with agriculture in a meaningful manner.

Southlands will also have four kilometres of multi-use pathing for cycling/walking and pedestrian sidewalks, and improved bike lanes on Boundary Bay Road.

Century Group was founded by Sean’s father George in 1957 as a construction company. He was an Irish immigrant who came to Canada in 1949.

“It was founded because the plans had been made to open up what became known as the Massey Tunnel, which was to connect Vancouver by road to the new ferry terminal then being constructed out in Tsawwassen to connect to Victoria,” Hodgins explained.

“He saw the opportunity that opening up the tunnel would provide to a new suburb area in South Delta.

“He did quite well in doing that. That’s where we got our start. And of course Southlands is in south Delta, but we have since diversified by nature of our office being in New Westminster.” 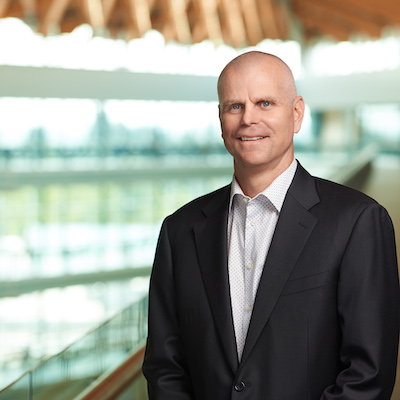 Sean Hodgins is the president of Century Group, which was formed by his father, George. (Courtesy Century Group)

Sean Hodgins started working for the company in 1993 when he was 25. At first he was involved in project management, then he became the company’s network administrator. He rose through the ranks and became president in 2005.

“The low-rise to mid-rise residential is really our sweet spot,” said Hodgins.

The Southlands development site is close to Highway 17, providing easy access to Vancouver Island via the Tsawwassen BC Ferry Terminal, and the Metro Vancouver region with connections to three major highways: Highway 17A, Highway 99 and Trans-Canada Highway 1.

In 1990, George Hodgins and Century Group acquired the site, promising to maintain its agricultural heritage.

Since then, over 80 per cent (425 acres of the 530-plus acre site) has been transferred to public ownership and dedicated to agricultural use, natural habitat and public open space. In 2006, public consultation was initiated, establishing the framework for the current Southlands plan.

“It’s been a life’s work actually. I’ve been working on it for many, many years and it’s finally coming to fruition. It is very exciting to see it happening, that’s for sure,” said Hodgins.

Century Group is opening its first residential phase in September. There will be 33 townhomes and four cottages ready for occupancy at that time. In total there will be 77 homes in the first phase.

The complete residential component of Southlands will take eight to 10 years to build.

The Market Square public area will have about 3,500 square feet of retail to be built in the first phase. Hodgins expects the retail component of the project will be about 50,000 square feet on full build-out.

Construction will progress over the next five years.

“Really what we want, and not to sound corny, but the butcher, the baker, the candlestick level of stuff. Real artisan stuff. It’s really hard to find them.”