The completion of Cadillac Fairview’s $360-million redevelopment of Ottawa’s CF Rideau Centre will be celebrated next week, almost three years after the project was first announced. 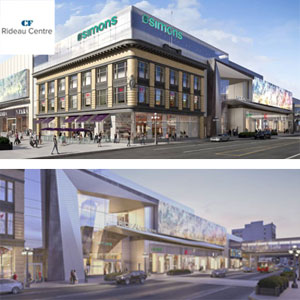 “Cadillac Fairview takes a lot of pride in its assets and takes a lot of time to look at the assets and make them better and enhance them and make sure that they answer the needs of the community in the particular market that they’re located in,” said Cadillac Fairview senior vice-president and portfolio manager Danielle Lavoie of the reasoning behind transforming the downtown shopping centre it took over in 2012.

Located at the centre of the nation’s capital, the CF Rideau Centre is one of Cadillac Fairview’s best performing shopping centres and a major tourist destination. The centre is connected to the Westin Hotel, the Ottawa Convention Centre and adjacent to the vibrant By-town Market that’s become increasingly popular among young professionals and tourists.

The redevelopment began in the fall of 2013 and the scope of work included renovating the existing mall, a brand new food court and a four-level expansion.

The project also included integration of three light rail transit access points from the shopping centre to Rideau Station, a key stop along Ottawa’s new Confederation Line that’s expected to open in the spring of 2018, as well as connection to an existing three-level underground parking garage with almost 400 stalls.

In the first phase of the project, a former three-storey Sears store was redeveloped so that its ground floor could become a 35,000-square-foot dining hall with 16 eating establishments and seating for 850 people. It opened in August 2014 and features reusable dinnerware, glassware and metal cutlery to reduce the amount of waste from wrappers, paper plates, plastic cups and utensils.

The two floors above it became the new home to Canada’s second Nordstrom store. The American upscale fashion retailer opened its doors at CF Rideau Centre in March 2015.

“It just went through its first year of operation and it had a fantastic year,” said Lavoie. “We obviously made the right choice by bringing this retailer to the market.”

The final phase of the redevelopment was perhaps the most ambitious, as it involved building a new wing and integrating the historic Ogilvy Building, which was dismantled brick by brick and reconstructed. The renovated building is now a new Simons store that’s connected to the existing mall through three levels of new retail.

The expansion features 28 new stores, including Tiffany & Co., Ted Baker London, Anthropologie, H&M, Frank + Oak, Victoria’s Secret, J. Crew and Massimo Dutti. Not all of the new tenants will be ready to open next week.

The new space is fully leased and CF Rideau Centre’s overall occupancy rate is well above 90 per cent, according to Lavoie.

“Some retailers went from the existing mall to the expansion and we’re still working on backfilling the space, but they’re still operating there until they open in the expansion.”

Cadillac Fairview also did a complete facelift of CF Rideau Centre and an interior redesign that includes: façade enhancements; upgraded washrooms; new artwork; a rebuilt and repurposed bridge that goes over Rideau Street into the centre; and a complete interior renovation that features new quartz flooring, enhanced lighting, glass guardrails and modern amenities.

“We worked really, really hard with the contractors and our client retailers to make disruptions as minimal as possible,” said Lavoie. “Everybody was very patient and very collaborative, which was instrumental to the success.

“The property continued to operate on a business as usual basis. Other than a bit of dust that we cleaned up as soon as we could, everything went extremely smoothly.”

The redevelopment of CF Rideau Centre is just one of a handful that Cadillac Fairview is involved with at its shopping centres to “stay best in class and ahead of the curve on everything,” according to Lavoie.

New retail outlets are being added in CF Toronto Eaton Centre, where the former Sears store will become a Nordstrom that’s slated to open this fall.

The two-storey CF Masonville Place in London, Ont. is about to undergo $77 million in renovations and interior upgrades to accommodate new retailers that include ZARA, H&M, Sport Chek/Atmosphere, Hot Topic and Disney Store, as well as new dining options.

Cadillac Fairview is spending $21 million at Toronto’s open-air CF Shops at Don Mills to enhance customer experience through the creation of elevated entertainment zones and improving access to parking and public transit. It should be finished by next spring.

CF Sherway Gardens has already added 210,000 square feet of retail space that opened last fall and relocated its food court as part of a $550-million redevelopment, and now another 90,000 square feet of existing space is being renovated. That work should be done by the fall of 2017.

Lavoie said other redevelopment projects are still in the planning process.