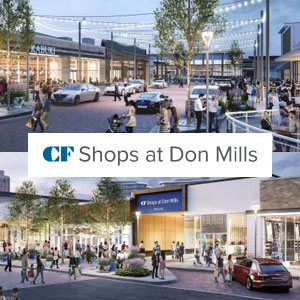 It also marks a seven-year experiment of integrating residential onto a shopping centre property that keeps on growing as condo buildings continue to sprout up on the 40-acre site.

Most importantly perhaps for the Toronto-based real estate giant, it is a living test lab for the company’s ambitious development plans around Buttonville Toronto Airport.

“Buttonville is millions and millions of square feet – it is still not settled on what exactly the number will be – but Don Mills is a smaller version of what Buttonville will be in the fullness of time,” said Niall Collins, senior vice-president of development with Cadillac Fairview.

“We are certainly going to use what we have learned at Don Mills to be part of the ingredients for a successful Buttonville.”

The Shops at Don Mills, where Cadillac replaced a tired, suburban mall concept with a shopping centre that features an outdoor skating rink, high-end shops and restaurants (plus new condo) holds many lessons for future developments, including Buttonville.

The lessons learned are:

• Parking is critical. Like the Don Mills centre, Buttonville visitors will arrive predominantly by car.

Parking has been a major headache for Cadillac and Don Mills visitors. Hopefully the problem has been addressed by upgrades that include digital signage displaying real-time parking counts and better access to the free, four-level, 1,000-stall parkade accessible through a new pedestrian entryway.

“People will make compromises when they come downtown but as you get a little bit north of the city, they want that improved accessibility,” explained Collins.

• A nod to nodes approach works. With the benefit of a blank slate at the Shops of Don Mills, Cadillac was able to group stores and services in nodes specializing in areas such as food or high-end fashions, all the while ensuring there are no “dead spots” that no one frequents.

• Feed the ecosystem. It may seem strange to have a supermarket and a furniture store at a high-end mall, but it fits the mixed-use model.

At Don Mills, the village concept will continue to grow by adding new villagers as three of seven planned condo developments have been built and sales for building No. 4 begins this summer.

Up in the air

Plans for the massive development project at Buttonville are still, ‘up in the air’ as the various authorities have not granted the land use change for the project. The application is currently before the Ontario Municipal Board.

Due to delays in getting planning approvals, the development partners Cadillac Fairview and Armadale Co. Limited have extended the period the Buttonville Airport will operate “until at least fall 2017.”

Three years ago, Cadillac unveiled plans for the 170-acre site where it intends to create “a world-class employment district and vibrant, mixed-use lifestyle destination which puts people at the forefront of urban planning.”

Armadale, Cadillac’s partner on the development, is a private, family-operated real estate owner and developer headquartered in Markham, Ont.

Armadale “identifies opportunities to develop unrecognized, undeveloped or undervalued properties and participates operationally and financially either as consultants, owners or in joint ventures,” it said in a recent news release.

Cadillac Fairview, wholly owned by the Ontario Teachers’ Pension Plan, is one of the largest owners, operators and developers of best-in-class office, retail and mixed-use properties in North America.