The CF Fairview Mall in Toronto is about to receive an additional $80-million revitalization from... 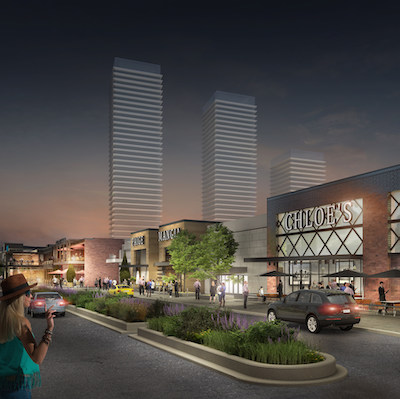 An artist’s rendering of what the CF Fairview Mall could look like after an $80-million renovation, and the potential addition of residential, office and hotel towers. (Courtesy Cadillac Fairview)

The CF Fairview Mall in Toronto is about to receive an additional $80-million revitalization from owners Cadillac Fairview and TD Greystone Asset Management, The co-owners are also seeking a rezoning of the property to allow the development of residential, hotel and office towers.

The $80-million investment will be used to transform 230,000 square feet of existing department store and other retail space to introduce new brands; to create a new row of restaurants; and to improve pedestrian access to the property and the nearby Don Mills subway station.

Construction is expected to begin later this month, with completion of the revitalization slated for 2023.

CF and TD Greystone say discussions with the City of Toronto centre around the possibility of adding residential, hotel and office uses along the periphery of the property. Along with this type of development, the companies say community benefits could include new parks, community spaces and amenities, different housing options and improvements to sidewalks and landscaping.

“Many changes” around CF Fairview Mall

“This area is undergoing many changes which reflect peoples’ desire to work, live, shop and dine in a dynamic, transit-connected mixed-use community,” said Wayne Barwise, executive vice-president of development at Cadillac Fairview, in a release. “Our redevelopment plan is about diversifying CF Fairview Mall and the surrounding land so we can continue to offer a vibrant destination for people to come together and enjoy.”

The mall is located in East Toronto, at the intersection of Hwy. 404 and Sheppard Avenue East. It is less than a kilometre from the Hwy. 404-Hwy. 401 interchange.

Built in 1970 for what was at the time a largely suburban population, the area is undergoing significant growth and transformation. The creation of a restaurant row, changes to the former department store space and improvements to pedestrian access to the property reflect that transformation, “offering a premiere destination for retail, dining and other services” the release states.

“We are excited to be involved in the redevelopment of CF Fairview Mall, one of Canada’s premiere mall and shopping destinations in Toronto,” said Jeff Tripp, managing director of real estate investments for TD Greystone, in the release. “The mall’s strategic proximity to transit and nearby residential neighbourhoods is ideal for creating a unique experiential and service-oriented retail environment.”

Once the rezoning application goes to the city for review, public information meetings will be held to provide more information.

The CF Fairview site would be the latest in a string of major revitalizations and developments for the firm in recent years at Toronto retail properties. At CF Shops at Don Mills the company introduced residential and other spaces surrounding an enclosed mall; and at CF Sherway Gardens it built up a new collection of restaurants and an enhanced pedestrian area surrounding the property.

Cadillac Fairview is one of the largest owners, operators and developers of office, retail and mixed-use properties in North America. The CF portfolio is owned by the Ontario Teachers’ Pension Plan, a diversified global investor which administers the pensions of more than 300,000 active and retired school teachers.

TD Greystone is an institutional money manager based in Regina with additional offices in Toronto, Winnipeg and Hong Kong.

The merged company offers access to alternative investments and the ability to further integrate private and public asset classes into investor portfolios.