Victoria’s property development market over the last 15 years has experienced major swings. The economic tap tends to be either on, or it’s off. 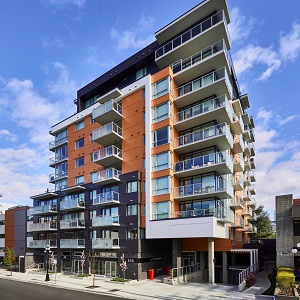 The Vancouver-based development firm is currently surfing an economic wave in Victoria. The 24-year-old company has either just finished, or is in various stages of developing, several mixed-use residential developments in and around the B.C. capital.

“The market is certainly stronger today than it has been over the last 15 years,” Chard said. “We’ve experienced real ebbs and flows in the Victoria market over those years. I feel right now there is strong demand, there is limited supply and there seems to be a wave of people looking at Victoria now.”

He said that wave is being fuelled by a strong economy province-wide. “And we have a good economy in Victoria. The tech sector, the construction sector, ship-building — those are really fuelling the demand right now.”

The company’s condos and apartments are also being snagged up by aging Victorians and Vancouverites who are apparently cashing out of their valuable B.C. real estate and downsizing.

Chard, who was born in Vancouver and raised in B.C., said the business is split between Vancouver and Victoria, with the odd project in Toronto. Its list of projects in Victoria is lengthy.

The firm recently completed the 82-unit Escher condo project on Broughton Street. Yello on Yates, a 209-unit purpose-built rental building, is under construction at 819 Yates Street.

Chard also recently launched The Yates on Yates, a two-phase condo project with 112 units in the first phase and 134 units in the second. “We are well into our pre-sale program on that project,” Chard said.

Chard would purchase two other properties, including the 1892 Duck’s Block, converting the buildings into condos of 51 and 53 units, while preserving the heritage character of the Duck Building. Commercial space would be developed at street level.

Victoria doesn’t have the depth of the Vancouver market, but Chard understands the smaller city’s ups and downs. “We’ve gone through some very slow market times in Victoria,” he said.

Adjust to the market, but keep building

Chard said his form was one of the few developers still building in Victoria during the depths of the global recession, which hit in 2008.

“The local economy softened again around 2012,” he said. However, Chard kept building, adjusting projects to meet the needs and lower pricing of the softer economy. “We have tried to cater to the demand that we were reading in the market.”

With the tap in Victoria currently on, “we think the demand is currently here and we have a pipeline of product that is going to be coming to market over the next couple of years,” he said.

Most of Chard’s units are going up in Downtown Victoria, a relatively small district that hugs the city’s picturesque harbour. In recent years, the buildings have been getting taller.

“The downtown core has come back really quite strong in the last 12 to 18 months,” Chard said. “You’re not seeing the vacancies downtown like you were three years ago. I think there’s a bit of a renaissance happening in the downtown.”

He said most of the projects are mixed-use with commercial storefronts on the street level.

The formula is quite simple. Chard and other mainstay Victoria developers such as Townline are bringing in new residents while also setting up the commercial spaces to serve them.

“The synergy has come together for the downtown of Victoria,” Chard said. “We have a very small foreign buyer component in our condos.

“We recently did a survey with the Urban Development Institute of Victoria. I was the chair of it,” he added. “We canvassed our members building condos. The average foreign buyer percentage is only three per cent of the downtown condos.”

Victorians comprise the largest group of buyers, Chard said, noting only about 10 per cent of its renters and buyers are coming from Metro Vancouver. “We’re quite proud of that.”