One day after announcing the pending sale of most of its Ontario long-term care residences, Chart... 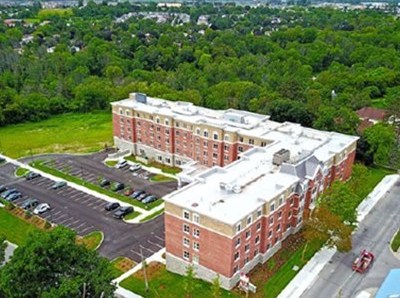 Bowmanville Creek is one of three Ontario seniors residences to be acquired by Chartwell as part of a $288-million transaction with MTCO. (Courtesy Chartwell)

One day after announcing the pending sale of most of its Ontario long-term care residences, Chartwell Retirement Residences (CSH-UN-T) says it has a deal to acquire three recently constructed seniors living homes for $228 million.

The residences are all in Ontario – Balmoral Place in Collingwood, Allendale Station in Barrie and Bowmanville Creek in Bowmanville – and comprise a total of 467 suites.

“We are pleased to add to our portfolio three modern, high-quality residences located in strong markets where we already have a presence and which will allow us to generate meaningful management synergies,” said Jonathan Boulakia, Chartwell’s chief investment officer and chief legal officer, in the announcement.

“This is our second transaction with MTCO-affiliated companies.

“In 2015, we acquired and successfully transitioned three other residences, including Chartwell Montgomery Village, where we recently opened a 122-suite addition.”

MTCO Holdings Inc., is an Oakville-based developer and operator of seniors living residences.

The purchase price includes a deferred payment of $3 million, to be paid either on completion of a 132-suite condominium development under construction in Balmoral Place, or on June 30, 2024, whichever comes first.

The owners of the Balmoral condominium units will have access to the amenities of the retirement residence for a monthly fee.

In addition, $3 million of the purchase price has been allocated to 1.8 acres of excess land at Bowmanville Creek retirement residence, where approximately 112 additional suites could be developed.

As part of the financing, Chartwell will assume $85.6 million of in-place mortgages on two of the properties, at an average rate of 3.7 per cent and maturing in November 2023. The remainder of the purchase will be settled via cash on hand and available credit facilities.

Chartwell expects to generate first-year unlevered NOI yield of 5.3 per cent and stabilized NOI yield, upon achieving 95 per cent occupancy, of 6.4 per cent.

In the AgeCare/Axium transaction, the partners will acquire 16 operating residences in the Greater Toronto Area and several other cities and towns.

They will also acquire, under a forward purchase agreement, a 17th Ontario LTC home with 224 beds which is under development and slated for completion in 2023 in the town of Ajax.

AgeCare will assume management of 100 existing beds which are currently operating at that site.

Chartwell’s Ontario LTC management platform, which serves those homes as well as six other homes comprising an additional 866 beds, will also be divested to AgeCare.

Chartwell expects to realize net proceeds after expenses, debt repayments and other costs of $277 million from the transaction, and said in the announcement some of those proceeds would be used to expand its portfolio of retirement homes.

The company had announced several months ago it intends to focus on the growing seniors living sector and move out of the long-term care segment.

Chartwell is an unincorporated, open-ended real estate trust based in Mississauga which indirectly owns and operates a complete range of seniors housing communities, from independent supportive living through assisted living to long-term care.

It is the largest operator in the Canadian seniors living sector with over 200 retirement communities in four provinces including properties under development.