The Quebec model of affordable rental housing for seniors will “absolutely” catch on in the rest of Canada “because it makes common sense,” says the chief financial officer and chief investment officer of Chartwell Retirement Residences. 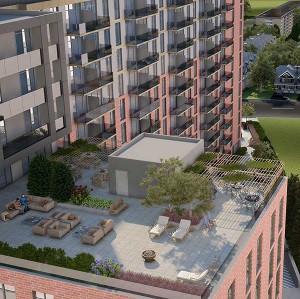 Chartwell is exporting the Quebec a la carte model of rental seniors housing into Ontario with the Sumach residence in Toronto. (Image courtesy Chartwell Retirement Residences)

Vlad Volodarski says Quebec’s à la carte model, in which seniors select and pay for only the services they want, is bound to receive traction across the country because it helps solve the affordability issue.

“Affordability is one of the key issues that the industry is facing, so if we can create more price entry points for residents it will certainly increase the demand,” Volodarski says.

Chartwell (CSH.UN-T) is in the midst of building its first Quebec-style apartment building in Ontario, the 333- unit The Sumach in the Regent Park neighbourhood east of downtown Toronto.

Located at Sumach and Shuter Streets, the 12-storey, pet-friendly building will include a pet spa,  82 underground parking spaces, 100 bike racks, more than 5,000 square feet of retail space, an outdoor terrace and barbecue area and a restaurant and cafe/bistro.

“Cook in your suite, dine at our bistro, enjoy a drink at our pub – the choice is yours,” reads marketing information for the residence.

Set for completion next year, accommodations in the building include studios, one-bedroom, one-bedroom-plus-den and two-bedroom suites and townhomes.

He says Quebecers can pay a $1,500 monthly rent for a one-bedroom apartment and buy services as needed whereas a similar apartment in Ontario costs $4,000 and includes meals and housekeeping services.

Outside Quebec, “it’s more of a resort-type all-inclusive living,” which puts up barriers to affordability among seniors. It’s one of the main reasons Quebec has a penetration rate of 18 per cent for seniors over age 75 who live in retirement homes compared to Ontario’s five per cent, he says.

Chartwell, an unincorporated, open-ended trust, is the largest operator of seniors’ residences in Canada. According to CBRE numbers as of fourth quarter 2015, Chartwell was ahead of Revera, BayBridge Senior Living, Réseau Selection and Cogir.

Volodarski says Canada’s aging demographics “gives us a lot of comfort. There’s not going to be any occupancy issues just because of the sheer number of people that will be coming that will require (Chartwell’s) services.”

Changes to government funding down road

He also predicts in five to 10 years, fiscal restraints will leave governments unable to build more long-term care beds for seniors. Alternative models for providing accommodation and health care services to seniors will be needed. One solution could be a voucher system in which governments fund seniors for their care needs and allow them to spend that funding anywhere they choose.

This would enable seniors to choose who would take care of them – whether it’s long-term care, family members, home care or retirement residences.

“We think that if retirement residences continue to do a good job taking care and providing services for the residents, that will help residents to afford those kinds of services and will create additional demand for private pay retirement home operators,” Volodarski says.

Chartwell announced in late July it had acquired an 85 per cent interest in Chartwell Le Teasdale Retirement Residence Phase I in Terrebonne, Que., from its Quebec development partner Batimo. The 343-suite residence opened in May 2016 and has a current occupancy of 82 per cent.

While Chartwell does the vast majority of development itself in the other provinces in which it operates – Ontario, B.C. and Alberta – in Quebec, Batimo has “expertise and knowledge of the local market that we did not have.”

Five or six Chartwell properties are under development in Quebec by Batimo through an arrangement under which Chartwell acquires 85 per cent once stabilized occupancy has been achieved, he says.

One of the projects Batimo is developing for Chartwell is the 345-suite Chartwell St. Gabriel in Saint-Hubert, Que. Expected to be completed in the second quarter of 2018, the property is currently 66 per cent pre-leased – something Volodarski admits is unusual.

“It’s a runaway success. It’s very successful pre-leasing because we were at 50 per cent occupancy even before we put the shovel in the ground,” he says, citing an undersupplied market and the project’s location as reasons for its popularity.

He notes that five years ago, the industry did not start pre-leasing retirement residences early because seniors did not buy from blueprints. Sales centres were not opened until three months before opening because seniors liked to see the finished building before signing a lease.

“Now we’re opening these sales centre(s), in many cases before we start construction, 18 months before the building is scheduled to be opened and that seems to be working very well.”

Given the “management-intensive” nature of the business, Volodarski does not see Chartwell expanding operations to other provinces.

The Mississauga-headquartered company has regional offices in Montreal, Vancouver and Calgary and “we need to have people on the ground at all times” to provide food services, health care, lifestyle and activation services and building management.

“It’s harder to create that regional structure in the provinces where the population is one million people,” because there are not enough people to create bulk and scale, he says.

Twelve to 15 properties are required to set up a regional office and it’s hard to find acquisition opportunities of that size in the smaller provinces, he says.