Chartwell Retirement Residences achieved a breakthrough year in 2015 and positioned itself for more growth and strong operating results moving forward. 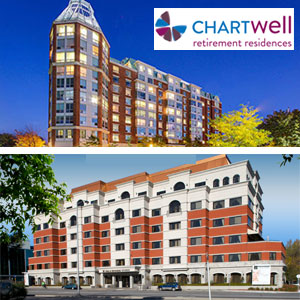 “Occupancy is the main driver of profitability, and we’ve had success at driving a high level of occupancy,” Chartwell chief financial officer and chief investment officer Vlad Volodarski said of a 2015 same-property rate of 91.9 per cent.

“But we still have room to grow so we are definitely continuing to invest in marketing and sales activities to make sure that we’re known out there in the marketplace.”

Chartwell (CSH.UN-T) is an unincorporated, open-ended real estate investment trust (REIT) and the largest operator in the Canadian senior living sector. Including properties under development, it owns interest in or manages 185 locations encompassing approximately 26,000 suites across Quebec, Ontario, Alberta and British Columbia.

It’s a very fragmented sector, however, as 65 per cent is owned by individual operators and small chains while the remaining 35 per cent is controlled by the top 15 operators.

Even in this competitive environment, Chartwell’s 2015 accomplishments included: selling its entire American portfolio for U.S.$847 million; investing $584 million to acquire interests in 13 Canadian properties with 1,625 suites; completing two small development projects and advancing its development pipeline to a share of 1,760 suites; improving same-property net operating income of by 1.9 per cent; and increasing corporate liquidity to $172 million.

Chartwell creates value for investors by managing its Canadian real estate and operations. That wasn’t the case in the United States, where it had long-term contracts with a third-party manager that were difficult to break. Selling the portfolio was a way to get out of these contracts and Volodarski said the timing of the divestiture was also fortuitous.

“Development activities in the U.S. started to pick up at the end of 2014 and in 2015. We were concerned with the impact that that new development would have on our U.S. portfolio, in particular because the average age of our U.S. properties was 28 years. Usually when you have new entrants to the marketplace, older properties suffer for a period of time, although they often recover.

“That portfolio also needed some major capital investments because of the age of the properties. The market was also such that the valuations for properties were very high and there were a lot of people looking to buy real estate in the U.S. . . . so the market was very seller-friendly at the time.”

Chartwell’s top priority is reinvesting in its existing properties to make sure they’re as competitive, efficient and profitable as possible in their respective markets.

Chartwell also has a joint venture partnership with Batimo/EMD Construction that has five properties under development in Quebec. The latest is the Chartwell Le Montcalm in the community of Candiac.

Chartwell would like to enter similar joint ventures in other parts of the country to access more development sites.

“The pace of development at the present time is more or less in line with the demographic growth of the population,” said Volodarski. “So, while being competitive, it’s not insane.”

Chartwell co-owns 38 senior residences with Welltower (HCN-N) and manages three others for the U.S.-based REIT. It also manages a few other properties in one-off relationships with other owners.

While the majority of Chartwell’s 2015 acquisitions were of high quality, the REIT generally prefers to buy properties it considers undermanaged so it can create additional value by improving services, reducing expenses and ensuring customer satisfaction grows to boost occupancies and revenues over time.

“The real estate itself needs to be newer in the market and well-located,” said Volodarski. “We will likely not buy older properties that are undermanaged because the upside is limited because of their capital needs.”

Volodarski wouldn’t commit to a number, but promised more opportunistic acquisitions in 2016.

Chartwell recently entered into a definitive agreement to acquire the Duke of Devonshire Retirement Residence in downtown Ottawa for $63.6 million. It opened in 2009, has 105 suites that are 93 per cent occupied, and has an underground parking garage with 215 spaces leased to The Ottawa Hospital under an agreement expiring in 2025.

“The property delivers phenomenal services to the residents that are there and commands very high rental rates for that,” said Volodarski. “We think the location of this property is wonderful and virtually irreplaceable, and we would absolutely love to own more properties like that.”

A range of different residences

Chartwell indirectly owns and operates a range of seniors housing communities, from independent supported living through assisted living to long-term care. It sees the most growth coming from independent apartments and limits the number of long-term care beds in its portfolio to 20 per cent of its overall total because they have government-capped rental rates that rope in profit margins.

“The good news about long-term care is that funding has been steady, with inflationary increases, over the years,” said Volodarski. “While we don’t expect significant profitability growth, it delivers and we expect it to continue to deliver steady cash flow streams to Chartwell.”

Involvement with long-term care also creates synergies and adds expertise in nursing, infection control and other best practices Chartwell wouldn’t have if it was solely involved with retirement homes.

The expected 2016 Canadian senior population growth rate of 2.3 per cent is expected to accelerate to more than four per cent in 2021, which will create significant demand for seniors’ residences and raise the sector’s profile among potential investors, according to Volodarski.

“It took us 40 years to build the 400,000 beds we have today in Canada, and in 20 years we’ll need a million beds just to serve the demand that’s there because of demographic growth,” he said. “Those are huge numbers, and I’m sure it will attract a lot more institutional money to the sector over time.”