Choice Properties to acquire CREIT in $6B transaction 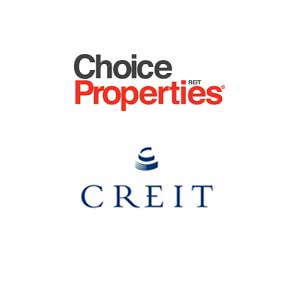 When the deal closes, Choice will have an enterprise value of more than $15 billion. The trust, controlled largely by Loblaw Companies Limited (L-T), George Weston Limited (WN-T) and the Weston family, will hold a diversified portfolio comprising 752 properties with 69 million square feet of gross leasable area.

“We are energized by the transformative next step that this deal represents for both of our organizations,” said Galen Weston, chairman and CEO of Loblaw and George Weston Ltd., during a morning conference call with analysts and media. “The combined entity will create Canada’s largest REIT.

“It will be uniquely positioned to deliver value for unitholders through the asset management of its diversified portfolio of blue-chip properties across the country while also unlocking new opportunities through a robust retail, industrial and mixed-use development pipeline.”

Upon closing, Loblaw/GWL will own nearly 66 per cent of the combined entity, while former CREIT shareholders will hold 27 per cent and other Choice shareholders seven per cent.

Morrison stepping down as CEO

The acquisition will also bring about a change at the top of Choice REIT. Upon closing, John Morrison will step down as president and CEO of Choice and will serve as non-executive vice chairman, providing guidance to the combined organization.

Assuming leadership roles at Choice Properties will be Stephen Johnson — currently head of CREIT — as president and CEO, Rael Diamond, as COO, and Mario Barrafato, as CFO.

“Both Choice and CREIT have produced an impressive track record of earning, income growth and NAV over a long period of time,” Johnson said. “We believe this is a wonderful opportunity for our collective investors.”

The total consideration will consist of approximately 58 per cent in Choice Properties units and 42 per cent in cash.

Choice sees the acquisition as an opportunity to both diversify and expand its asset base, adding significantly more and varied retail, industrial and office properties and expertise.

“I would say they are quite strategic and one of the important aspects of this transaction for Choice Properties is the increased diversification,” said Morrison. “Choice already owns a number of industrial-type units, but they are Loblaw-occupied.

“So now we are increasing our exposure to industrial which is something we were very anxious to do. We are diversifying our tenant mix as well so we think that is a very positive aspect of this transaction.”

“There are more opportunities for mixed-use,” said Morrison. “We are also seeing more opportunities in the major markets which was an attraction for us. So when we looked at the combined portfolios in terms of the direction that Choice Properties was going, this transaction adds to the pipeline of what we’ve got available to us in the combined company.

“We believe this is a strong future of real estate development, especially in the major markets. When you look at a lot of these locations, they are urban in nature, so the mixed-use aspect of those is really the future of development, and really has been, in the Canadian landscape.”

Choice says the transaction has been structured to maintain its current BBB credit rating. The trust says the combined entity will have leverage in the range of 45-46 per cent debt to total assets.

Choice Properties intends to maintain its current distribution of $0.74 per unit on an annual basis.

The transaction is subject to compliance with the Competition Act and certain other closing conditions customary in transactions of this nature. It will be carried out by a court-approved plan of arrangement and will require the approval of at least 66 2/3 per cent of the votes cast by unitholders of CREIT at a special meeting expected to take place in April 2018.

The transaction is anticipated to close in the second quarter of 2018.

CHECK BACK LATER: RENX will be updating this story with new details as they become available.