Cineplex launched its first Rec Room in South Edmonton Common in September and is now in full roll-out mode with its “eats and entertainment” complexes. 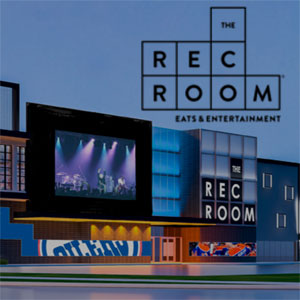 “Our research showed that there was a significant opportunity to develop and grow a business like The Rec Room on a national scale so we launched the concept as part of our ongoing diversification strategy,” said Cineplex communications director Sarah Van Lange.

“The Canadian entertainment landscape doesn’t currently offer a national social playground concept of this nature, and no other company is as well-positioned as we are to bring this concept to life.”

More than 77 million people a year view films in Cineplex theatres, and Van Lange said the company is one of North America’s largest amusement gaming operators and one of Canada’s largest food service operators.

What The Rec Room has to offer

So The Rec Room — which includes upscale casual dining, a sports bar, more than 100 amusement games where credits can be redeemed for prizes and “eatertainment-style” dining is available, air hockey, pool, ping pong, private dining rooms for special events, and a performance space for hosting music and comedy acts — seems like a logical extension.

Van Lange said feedback from patrons of the South Edmonton Common Rec Room has been “overwhelmingly positive” and surpassed expectations. Cineplex now plans to open new locations in Toronto, Calgary, London and another one in Edmonton.

“The Rec Room offers a diverse program of live entertainment, including comedy and live music, featuring both local and touring acts. Most shows have no cover charge but, for touring acts, there is usually a modest ticket price.”

The South Edmonton Common Rec Room employs an on-site event planner and has 10 private dining rooms that can accommodate groups ranging in size from 12 to 250 people. It also features a racing car simulator, a virtual reality experience, bowling and axe-throwing.

Toronto’s Rec Room will be part of downtown’s historic John Street Roundhouse, which is also home to Steam Whistle Brewing and Toronto Railway Museum. It’s expected to open this spring.

Calgary’s Destination: Deerfoot City, which is under a major redevelopment that will almost double its leasable area to more than 1.1 million square feet, will take up two storeys and almost 50,000 square feet in a former Sears store that was vacated four years ago. It’s scheduled for completion in the late summer.

London’s Rec Room will occupy approximately 36,000 square feet in a former Target store as part of CF Masonville Place’s $105.6-million redevelopment. It will open next year.

“We plan on opening between 10 and 15 new locations of The Rec Room over the coming years, each ranging in size from 30,000 to 60,000 square feet and customized to the individual community,” said Van Lange.