Claridge and Ivanhoé Cambridge have created a partnership to invest alongside private property developers in mid-sized real estate projects in the Greater Montreal region. 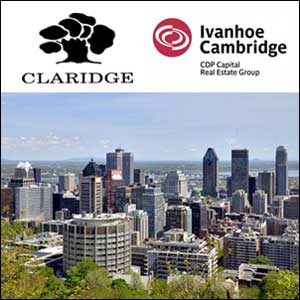 “Claridge has been actively involved in this kind of strategy of providing equity capital to local developers for development projects, and the pipeline of those kinds of opportunities started to grow beyond the current capacity of Claridge and it couldn’t do all of them,” said Claridge Real Estate executive vice-president and managing director Wayne Heuff, who will manage the partnership.

“So it led to Claridge approaching Ivanhoé Cambridge to add some scale to this strategy that we’ve been doing for a while and have been successful with. Ivanhoé Cambridge liked the idea and that was the genesis of how it all came together.”

The partners are setting up a vehicle to invest about $100 million, with an undisclosed split between them. They’ll be looking at development projects in the residential, mixed-use, light industrial and low-density office building sectors where the typical investment will range between $5 million and $15 million per project.

Since both Claridge (an investment firm representing the interests of the Stephen Bronfman family) and Ivanhoé Cambridge (the real estate subsidiary of the Caisse de dépôt et placement du Québec) are Montreal-based, Heuff said the partnership’s initial focus will remain in the city.

“The majority of the investments of this nature has been in Montreal, so we have a network of developers, we’re well-connected in the real estate community and we think there are a lot of opportunities in this market to continue to do those kinds of investments.”

The partnership is looking at projects with existing development partners while also talking to potential new partners seeking investment for specific development opportunities. Heuff said he would like to carry out the first project this year and it’s conceivable the partnership could do three or four deals before the end of 2016.

“Claridge has been a disciplined investor and it has paid off. The return history is very strong, so that’s what we want to perpetuate by picking the right partners and the right projects that have a high chance of achieving the intended financial outcome that has been portrayed to us.”

Claridge will supply accounting, reporting, tax, information technology and other back-end support functions while managing the investment platform, and the development partners will act as project and building managers.

“I think this is a good juncture in the market right now to be pursuing this kind of a strategy,” said Heuff. “There’s a fair bit of development activity going on in the Greater Montreal Area and there’s some meaningful infrastructure projects coming, which also creates more opportunities.”