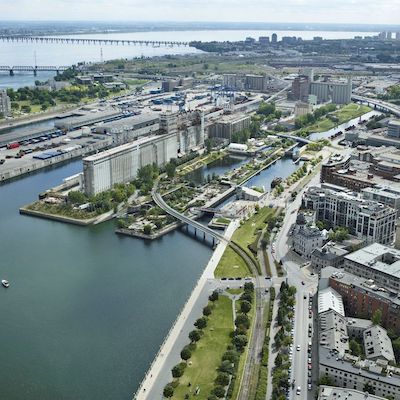 The Silo No. 5 and Pointe du Moulin area of the Old Port of Montreal. (Image courtesy Canada Lands Corp.)

The federal crown corporation has launched a request for proposals process to revitalize the imposing Silo No. 5 and the surrounding Pointe du Moulin pier off the Old Port and Old Montreal and transform it into an emblematic project for the city.

Canada Lands will sell the 750,000-square-foot Pointe du Moulin site and Silo No. 5 to the winning proposal, said Pierre-Marc Mongeau, vice-president of the Old Port of Montreal and Canada Lands Company (Quebec).

From 1903 until 1994, Silo No. 5, which was built by Grand Trunk Railway, stored grain from Western Canada that was then shipped overseas. The silo, which has been closed for almost a quarter of a century, will be the centrepiece of an area that could include residences, offices, stores, hotels and tourist attractions.

“Lots of developers have approached us, particularly in the last year (for information about the site),” Mongeau told RENX.  “We’ve had lots of demand, so we expect that there will be great interest.”

The request for proposals process comes on the heels of a public consultation about the Old Port of Montreal in which thousands participated. “As a result of those consultations, we know a bit more about what citizens want and we’re able to launch a complete RFP,” he said.

Mongeau would not provide an estimated value for Pointe du Moulin, which is off the southwestern flank of the Old Port.

He noted “we have no intention to sell the Old Port of Montreal,” which will remain a tourism and recreation area.

Proposals for Pointe du Moulin will be reviewed by an eight-member evaluation committee that includes representatives from Tourisme Montréal, Heritage Montreal, Canada Lands Company, Old Port of Montreal and Port of Montreal.

“We want to ensure that the proposals we receive are financially viable with a good concept,” he said. “The important thing is that (the project) will be well-integrated into the overall urban environment.”

The winning proposal should be chosen by August. The project will then be submitted for approval to the City of Montreal and for possible zoning changes at the site, which is currently zoned for light industrial and commercial uses.

Construction at the site could start in two years, Mongeau said.

Silo No. 5 and Pointe du Moulin

Canada Lands obtained the silo in 2010 from Transport Canada. The massive structure is about 1,311 feet long and up to 197 feet high, and is equivalent in height to about a 12-storey building.

Silo No. 5 is recognized by both the Quebec and Canadian governments for its heritage value. Quebec’s cultural ministry describes the silo as “monumental” and “massive” with “imposing blind walls.”

Canada Lands describes the Pointe du Moulin pier as one of Montreal’s most important sites, both for its historical significance and its urban presence. The silo and other structures, including spillways and conveyors, serve as a reminder of the intense industrial activity that once characterized Montreal’s waterfront, Canada Lands says.

In addition to preserving the heritage value of Silo No. 5, the winning project will require public access to the silo. A lookout on the roof, reached by elevator, would provide impressive views of the city, surrounding countryside, Mount Royal and the Lachine Canal.

The ground level of the silo could be transformed into stores, Mongeau suggested.

In recent years, an architect and a businessman proposed a project to develop a hotel and 1,000 housing units on the site with a public viewing area on the roof. Several years ago, the Museum of Contemporary Art proposed moving its exhibition space there.

Mongeau said the concrete structure of Silo No. 5 and its grain elevators are “extremely solid.” Some metal at the site has been stolen and the structure has fallen prey to graffiti tags from vandals, but most of the equipment in the silo is in good shape.

Canada Lands Company, which is self-financing, also has a number of properties in B.C., Alberta, Nova Scotia, Newfoundland & Labrador and Ontario, including the CN Tower and Downsview Park in Toronto.