The recent opening of Coast Capital Savings’ “Help Headquarters” completes the first phase of The HUB at King George Station development and marks the next step in the impressive evolution of Surrey, B.C. 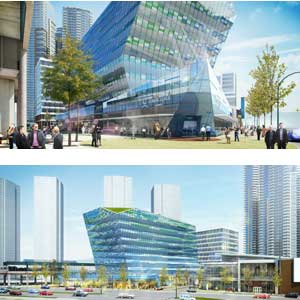 “Surrey is a really exciting place with a growing, young and educated population, with the Surrey city centre — where we are — anchoring it at this transit hub,” said Tim Grant, vice-president of investment for PCI Developments Corp., the company that built the 185,000-square-foot facility for approximately $100 million over two years.

“Given all the government infrastructure that’s been put in over the last several years, we’re starting to see things take off and there’s really good demand to be in the area. From our standpoint, it’s a community to watch.”

Surrey growing in size and influence

Surrey is British Columbia’s fastest growing and second-largest city. It was named the best place for small business in Metro Vancouver and is the only Canadian city to be named to the 2015 “Top 7 Intelligent Communities” list by the international Intelligent Community Forum.

Coast Capital, in partnership with the applied research and consulting division of furniture supplier Steelcase, conducted numerous workplace studies when considering the interior of the office space, which also has a unique exterior designed by architectural firm Musson Cattell Mackey Partnership.

There are themed cafes on every floor and recreational and reflective spaces to support a corporate culture of wellness, creativity and collaboration for the 700 Coast Capital employees. It includes retail and commercial businesses, a daycare centre operated by Kids and Company, and a gym with a yoga studio and lunchtime fitness classes.

The LEED Gold-certified building has a living seed wall on the patio of its 10th-floor lookout. It features ample bicycle storage space, designated car pool parking spots and plug-in areas for electric vehicles.

Seventy per cent of Coast Capital’s staff live south of the Fraser River, so locating its head office at the crossroads of Surrey’s new downtown centre at the King George SkyTrain station on the Expo Line was a deliberate choice.

The location is also close to the Fraser Highway, offering more commuting options for current employees and providing a desirable feature for attracting future workers.

Two other proposed transit lines will have stations in the vicinity, connecting to Newton to the south and Langley’s city centre to the east.

“In our market, to have three transit lines intersecting is really unique,” said Grant. “Outside of downtown Vancouver, I don’t believe there are any other places like that.”

Grant compares the second phase of The HUB at King George Station to a PCI project in south Vancouver called Marine Gateway at Cambie Street and SW Marine Drive that sits on the Canada Line.

The second phase of The HUB at King George Station will feature more than 200,000 square feet of retail space and another 170,000 of office space as well as up to 500 condominium and rental residential units in a space featuring a large podium with two or three towers.

“We’d like to get started with the retail and then carry on from there in terms of the office and residential,” said Grant.

The third phase of The HUB at King George Station will be another office building with retail elements similar in size to Coast Capital’s new headquarters. Anchor tenants are being sought and construction will begin subject to demand, according to Grant.

The fourth and final phase of The HUB at King George Station will be largely residential with some retail, with up to 800 rental and/or condo housing units.

“That’s probably a couple of years away yet,” said Grant.

All of the buildings will be built to LEED Gold specifications.

(The image above is a rendering of the Capital Coast Savings headquarters from the PCI Developments website.)