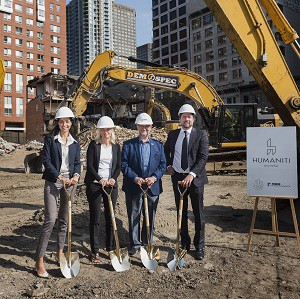 First off the mark could be a Toronto version of its $200 million-plus Humaniti project in Montreal, Mathieu Duguay, president and CEO of Cogir, told RENX.

Slated for completion in 2020, the Montreal Humaniti project will include five elements – a hotel, office space, retail space, condominiums and rental apartments – which Duguay says makes it unique in Canada.

“They’re specialists in condo development, in bringing projects to market and branding and in land research – finding land and sites,” Duguay says of DevMcGill. “We’re doing more and more real estate development and we needed somebody who was very strong in land research.”

DevMcGill president Stéphane Côté, a friend of Duguay for 15 years, will become a partner at Cogir. “Stéphane’s been making a living finding land for the last 20 years and he’ll bring us that expertise, so that we can do more development.”

Founded in 1995, Cogir made its name in real estate management but in recent years has also turned toward real estate development. It manages $3.5 billion worth of real estate in more than 150 properties in Quebec, Ontario and Nova Scotia and has almost 2,700 employees.

DevMcGill has developed a number of condominium projects since 1998. It currently has five condo projects underway in Montreal and one in Ottawa.

Duguay was speaking after the groundbreaking ceremony for the Humaniti project, which is located across from Montreal’s convention centre, the Palais des congrès de Montréal.

The hotel will sport the Marriott Autograph Collection banner – a first in Quebec – and will also include a 100-seat restaurant, a 60-to-80-person bar and lounge, reception and meeting rooms that can accommodate 300, and an exterior rooftop swimming pool.

Humaniti Hotel Montreal will be managed by Urgo Hotels Canada, the Canadian subsidiary of Urgo Hotels and Resorts.

He notes DevMcGill was already working with Cogir on the condo portion of Humaniti before his company bought the firm. “We weren’t involved in condo operations in the past and wanted to have a good management team to help us.”

The DevMcGill name and office will be kept. Construction and development teams will likely be moved to Humaniti when the project is completed.

Cogir currently has an office in Whitby, Ont., and a shared office in downtown Toronto but is aiming to expand in the province by acquiring management and development firms.

Duguay, who spends one day a week in Toronto, says he has several projects in the pipeline in the city and that development will begin there next year, likely on condos and residences for seniors.

He foresees a Toronto version of Humaniti in the greater downtown area of Toronto. “Humaniti is a bit of a business disrupter in the industry,” that will hold more attractiveness than the competition.

“Even if the market is saturated or well-served we think we’ll be able to go ahead with a Humaniti project. It’s sufficiently different to penetrate the market.”

Land, development and construction costs are more expensive in Toronto than in Montreal, but the higher costs are recouped in higher rent and resale rates, he says.

In addition, the current rate of immigration in Toronto surpasses the amount of condo construction in the city.

“There is an incredible demand in Toronto at the moment. We want to greatly diversify outside of Quebec,” says Duguay, adding he sees Cogir developing more projects outside of Quebec than within the province during the coming years.