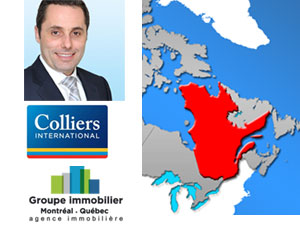 Colliers believes it can quickly grow the client base of the Montreal-based company by plugging it into its national services platform. Also, a shift in the Quebec real estate market bodes well for third-party services providers.

“We really believe the landlord services will be a growth engine going forward, said Andrew Maravita, managing director for Colliers International in Quebec (shown in image).

“There will be more and more demand in the greater Montreal area from the institutional landlords and that is why we made the acquisition.”

In business for 30-plus years

Groupe Immobilier, which has been in business for more than three decades, currently has more than seven million square feet of space under management, clustered in the Montreal and Quebec City markets.

Maravita said it made sense to buy out the seven-person Montreal firm “and leading market share presence” rather than build a practice from scratch.

“With the combination of (GIDM’s) expertise combined with Colliers’ platform and reputation globally, I think that we can get more institutional clients and more private clients on board.”

“It is becoming a challenging market for landlords. It is really a strong tenants’ market so I think it really requires a very aggressive approach on leasing and building identity for the various buildings in the portfolio when you are challenged with brand new product and a market with a growing vacancy rate.”

He estimates the current vacancy rate in Montreal’s downtown core to be approximately 13 per cent, an estimate that does not include sub-lease space of about 800,000 square feet, “If you were to add it in, you would be in the 20s easily.”

On top of new construction, some tenants are also downsizing their space requirements by utilization of more efficient open-concept configurations.

“That is causing a real increase in sub-lease space which is already built out at a much lower cost,” he said. “It makes for a very, very competitive marketplace.”

It creates a scenario that is tough on internal leasing teams, he said. “They are good with their tenants and they are good with renewals, but when you are getting into a very competitive market, I think it requires a different expertise which is a more dynamic, aggressive approach.”

National firms such Colliers have built their businesses on convincing landlords on the benefits of outsourcing real estate services.

In Quebec, that process is not as far along.

“Here, landlords have taken a more traditional approach compared to definitely the Toronto market or out West where there is natural outsourcing. Here in Quebec, it is starting but it is still relatively new.”

Colliers is counting on GIDM’s hard-won expertise and the big firm’s systems and platform to “make for a convincing argument where they would feel comfortable now outsourcing.”

He estimates about 30 per cent of Quebec landlords currently outsource landlord services, a percentage that will rise over time.

“We are seeing some trends where the large landlords are realizing that leasing is not exactly their core business and they should be focusing on asset management and returns and acquisitions and dispositions.”