Most people would view going from the top job of president and CEO at one company to senior vice-president at another as a step down. Not so for industry vet Scott Chandler. 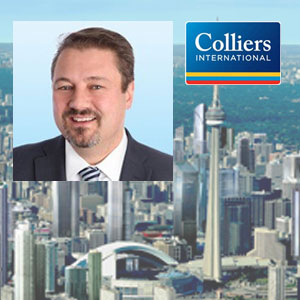 “It’s liberating,” he said. “I enjoy management, I love the work though. I love the client relationships when you are in the midst of doing work for clients. That for me is a much more satisfying feeling than helping other people do it.  I like getting my hands dirty.”

He has sandwiched a 13-year career with Cushman between a Bay Street role as a director at Scotia Capital and now his new position establishing a Toronto-based Colliers’ advisory service with expertise in capital markets, underwriting and sales.

“It is my roots. I ran a group of eight people who did this,” he noted. “I will be building a team of five to 10 people and focusing on those services.”

Chandler expects a busy 2016 for real estate deals. “It looks like a good year for M&A.”

Having been with Colliers all of two weeks, he said he is already elbows deep in the work.

“There have been a lot of early RFPs on development and on value-add strategies that involve investment, brokerage and finding partners for people.”

A busier deal-making environment should translate into a growing demand for advisory firms which compete for work with other similar firms but equally with their clients.

“Ironically a lot of our clients do it themselves. Because they are bigger than they were 10 years ago they have a lot of staff but they are still a great avenue for outsourcing.”

Not only for when there is a major initiative but also when a trusted third party advisor is needed with “access to the tremendous market intelligence” that is embodied in a team of 500 brokers.  “That is a role that we can play,” he said.

As examples Chandlers points to his experience with Brookfield when it was owned by Royal Lepage and his work on the GE Capital and Summit REIT’s portfolio transactions. “It is such an intense, short period, it is nice to be able to access outside providers.”

“Doing company-changing deals over a period of weeks or months, outside help is not just appreciated but necessary,” said Chandler. “Nobody is geared up to do that.”

An uncertain not quiet year ahead

With stock market plunges reverberating in the background, Chandler predicts “an uncertain year.”

That does not mean he expects a quiet year, though.

“I think we are definitely seeing no end of demand for core assets: centrally located, newer product, well leased. It seems to be tremendous demand for that still and it is being proven in some of the transactions underway right now.

“I see a lot of uncertainty around assets that have a bit of risk associated with them. There is not a huge appetite for risk in this environment, certainly with what is happening with the dollar and Alberta – and even interest rates, not sure where they are going to end up.”