One of the rare strata office developments in downtown Vancouver is benefitting from the combinat... 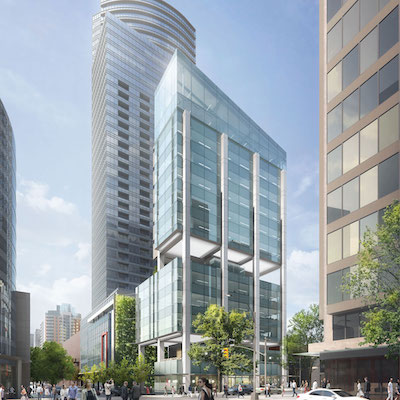 The Seymour is a 13-storey strata office property being developed in downtown Vancouver by Bonnis Group. (Courtesy Avison Young)

One of the rare strata office developments in downtown Vancouver is benefitting from the combination of a newly adjusted low interest rate, the region’s low vacancy rate and all-time-high leasing costs.

The developer has hired Avison Young to market the strata project’s 12 floors of office space, with the ground level reserved for Bonnis to hold and lease out as luxury retail space.

Avison Young principal, investment sales, Rob Greer says the project’s timing is good, what with the recent announcement by the Bank of Canada to drop its lending rate half a percentage point, to 1.25 per cent.

“It really appeals to long-term downtown office tenants that can justify owning versus leasing because of the low interest rate environment that we are in,” said Greer.

Low rates good for The Seymour

The low rate will help stimulate commercial buying activity among both users and investors. Owning is becoming increasingly attractive in a tight market with rents creeping higher than $70 per square foot, said Greer.

As well, the downtown office vacancy rate was at 2.6 per cent by the end of 2019, but is expected to drop again this year.

“Everybody is talking about the stock market this week and what that is doing to interest rates,” he said.

“We are seeing some of the lowest interest rates we’ve ever seen, which makes the argument around buying versus leasing make way more sense right now, especially if you have a long-term horizon.

“If you are a well-established tenant downtown and you are not going anywhere for another 10 or 20 years especially, it makes a lot of sense to consider purchasing.”

The Seymour is selling for an average of about $2,600 per square foot, and interest so far has been strong, said Greer.

The design, by Perkins and Will includes considerable outdoor and indoor amenity space, including a five-storey green wall at retail level.

About 11 per cent of the space has been sold, and many groups are coming through the show suite. There are full floors available, and buyers can opt for half floors, or other configurations.

Amazon, Microsoft in the neighbourhood

The building represents a new day for downtown Vancouver, which is seeing the reduction of its mom and pop shops.

The development replaces several one-storey retail stores, which would have paid equivalent taxes for the mid-rise building since tax rates are set at “highest and best” use.

Greer said the location is a big selling feature.

“If you look at that area, you have Amazon making a huge commitment with multiple buildings and nearby there is Microsoft.

“And to be honest, there is very little space available for any types of tenants these days downtown. Vacancy rates are one of the lowest we’ve seen in years.”

Construction will begin this spring on The Seymour, which will add to the new buzz that is moving into the downtown core.

The area will see an estimated five million square feet of new office construction by 2024, according to Avison Young’s Year-End 2019 Office Market Report.

That development created a stir back in 2017 when the developer pre-sold about half of the 374,000 square feet of office space as strata, within days. Prices topped $2,000 per square foot.

Then there is the large scale mixed-used Offices at Burrard Place by Reliance Properties and Jim Pattison Developments, with 99,000 square feet of office strata at the podium level.

Both strata projects have sold out and the buildings are scheduled to complete next year.

Greer said there have been developments in Metro Vancouver that have offered a small amount of office strata, but not on the scale of the new buildings underway downtown.

He expects to see more strata office product in the near future.

Investors looking to lease out for the long term have also shown interest. He estimates about 10 per cent of interested investors are offshore, which is lower than he would have seen a couple of years ago.

“That part of the market has cooled off a bit, but foreign investors do like new and shiny office buildings, versus older, kind of tired product,” Greer said.

“If you apply a market lease rate to this project, as an investor you can still get a decent yield in the two per cent range, so it appeals to investors.”

For those buying to set up shop, Greer said he’s receiving interest from businesses in legal, medical, finance and development fields.

Although it’s not being positioned for the tech industry, he could see downtown lease prices also attracting American tech companies.

“Even with our $70 rates, we are still cheaper than Seattle, New York and a lot of other major American markets.

“That helps drive the investment decision for some of these bigger tech users. They go, ‘Why lease in Seattle when we could come to Vancouver and actually save money?’ ”