Construction underway at The Reach in Kamloops

Ground broke on the first residential development at The Reach at Thompson Rivers University (TRU) in Kamloops, B.C. recently, and a second should start in the spring. 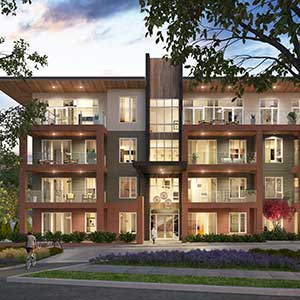 The Cape Group just launched Creston House, a 57,000-square-foot, four-storey, 50-suite condominium that sold 40 per cent of its units in a month before construction began.

Creston House was designed by Suva Architecture. It will feature five different suites, ranging in size from one bedroom and bathroom to three bedrooms plus den with two bathrooms.

“We’re really excited that the market response has been in line with what we anticipated,” said Finlay Sinclair, president and chief executive officer of Thompson Rivers University Community Trust (TRUCT). “We knew this was a prime real estate site.”

Kelson Group has a 56,000-square-foot, four-storey multi-family rental apartment that’s in the design approval stage and is expected to break ground in the spring.

“We’re trying to have a residential mix on campus,” said Sinclair. “Some people can afford to own a condo and some people can’t.”

Overview of The Reach

TRUCT was created six years ago to manage development on TRU property. Its mandate is to transform university land assets into a source of dedicated funding to support TRU students and academic activities, since British Columbia universities can’t be developers or have for-profit businesses due to their charitable statuses.

Ninety of TRU’s 250 acres of endowment lands were deemed to be excess to academia and are being transformed into a master-planned community known as The Reach.

When completed in some 25 years, The Reach is expected to have three million square feet of new residential space, 40,000 square feet of office space and 42,000 square feet of retail space. Restaurants, a hotel, an urban market, a pharmacy and a fitness centre could potentially be part of the mix for the development, which will include integrated outdoor public spaces connected by pedestrian and bicycle paths.

Continuing developer interest in The Reach

The request for proposal (RFP) deadline for development of The Reach’s first phase closed a year ago and there was great interest from developers from across Canada.

“We wanted to have experienced companies whose operations and business philosophy matched with our values,” said Sinclair. “We knew that we were going to get a really good company from an operational perspective, but all of the companies that responded fit our profile as well.”

The RFP for The Reach’s next phase hasn’t been issued yet, but that should happen soon and TRUCT is targeting the first quarter of next year to deliver its next development partner.

“The next part of The Reach is going to be a fairly significant mixed-use residential, retail and commercial project,” said Sinclair, who added that he’s had very positive discussions with developers from across the country about its viability.

“We’re very confident that our first two projects have set the tone and the flavour for developing at The Reach. We’ve proved the market and our ability to bring value and add value to these properties, and for the market to respond according to our vision.”

The Reach site on the TRU campus offers prime river views and is a five-minute drive to downtown Kamloops. The transit-friendly location is surrounded by an 800-hectare park.

“The Reach is successful because of our adjacency to Thompson Rivers University, but the Kamloops market is also on fire,” said Sinclair.

Kamloops is a city of just under 100,000 in south central B.C. at the confluence of the North Thompson and South Thompson rivers near Kamloops Lake. It’s located 58 kilometres southwest of the multi-sport Sun Peaks Resort and Canada’s second largest ski area.

“We’re not a large centre, but you can drive to Vancouver and back in a day,” said Sinclair. “There’s access to health care and access to education.

“The Kamloops market is very healthy and very strong. Cap rates are coming down very nicely and property values are rising accordingly.”

The Cape Group and Kelson Group

The Cape Group was founded by Ralph Schwartzman in Brandon, Man. in 1956. The three-generation family-led corporation, now based in Vancouver, has since invested in communities across Western Canada.

Kelson Group is a family-owned company that started managing properties in Kamloops in 1974. It has since expanded into Prince George, Abbotsford, Kelowna and Langley in B.C. and Edmonton, Grande Prairie, Sherwood Park and Leduc in Alberta.

Kelson Group developed its first property from the ground up in Abbotsford in 2012 and is constructing an apartment building named Peterson Landing at 1430 Summit Dr. in Kamloops that will open in the spring.