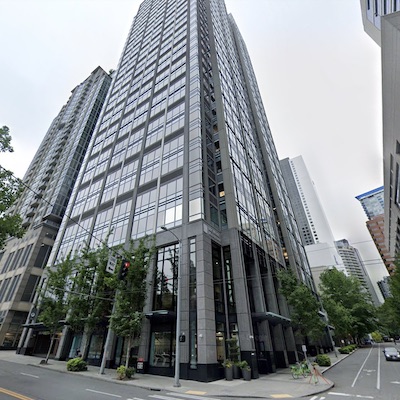 1918 8th Avenue in Seattle, a 36-storey office tower, is being sold to CPP Investments and Hudson Pacific Properties. (Google Maps)

The deal for the 1918 8th Avenue tower, situated in the heart of Denny Triangle proximate to Hill7, will see Hudson Pacific own 55 per cent and act as general partner, property, leasing and construction manager. CPP Investments will own the other 45 per cent.

The transaction is expected to close before the end of 2020.

The partners are also co-owners of Hill7 in the heart of Seattle’s Denny Triangle district.

“We are pleased to expand our partnership with Hudson Pacific through the acquisition of 1918 8th Avenue,” said Hilary Spann, managing director, head of real estate Americas, CPP Investments, in the announcement.

“Hudson Pacific is a leading real estate investor and operator, and this asset presents a compelling opportunity to add a high-quality investment with a strong cash flow profile to our joint portfolio in Seattle.”

The location of both 1918 8th Avenue and Hill7 is a few blocks from Hudson Pacific’s Washington 1000, a class-A office development site adjacent to the Washington State Convention Center addition.

1918 8th Avenue is 98 per cent leased with an average remaining lease term of 10 years and Amazon as its largest tenant, occupying a majority of the building. The LEED platinum-certified tower was completed in 2010 and features a multi-level lobby, great room, central conferencing facility and large fitness centre.

“Time and again, we’ve had success in growing our portfolio with properties adjacent to existing assets in neighbourhoods undergoing positive transformation and 1918 8th Avenue represents a perfect opportunity to do that once more in Denny Triangle and with our trusted partner CPP Investments,” said Victor Coleman, chairman and CEO of Hudson Pacific, in the release.

“With its prime location, modern amenities and tenants backed by superior long-term credit, this investment will build upon our success in downtown Seattle and the Cascadian Innovation Corridor more broadly.

“We are also pleased to significantly expand our relationship with Amazon, which now becomes one of the largest tenants within our office portfolio.”

According to published accounts at the time, 1918 8th Avenue was constructed by Seattle developer Schnitzel West, and then sold in 2011 to JPMorgan Chase once Amazon had been signed on as the anchor tenant. That transaction was valued at $350.1 million US (at that time, U.S. and Canadian dollars traded close to even).

Hudson Pacific and CPP Investments plan to place a secured, non-recourse loan for approximately 50 per cent loan-to-cost from a “prominent institutional lender.” Hudson Pacific says it will provide further details on the financial impact of the transaction at closing.

Hudson Pacific is a real estate investment trust with a portfolio of office and studio properties totalling nearly 19 million square feet, including land for development.

Focused on West Coast epicentres of innovation, media and technology, its anchor tenants include Fortune 500 and leading growth companies such as Netflix, Google, Square, Uber, NFL Enterprises and more.

Hudson Pacific is publicly traded on the NYSE (HPP-N) and listed as a component of the S&P MidCap 400 Index.

CPP Investments manages the fund on behalf of more than 20 million contributors and beneficiaries of the Canada Pension Plan.