The Toronto apartment rental market is hot but with little new product, existing building stock expensive and often locked up by long-term investors, it’s a tough play to get into. 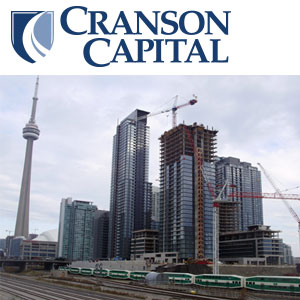 Toronto real estate investment firm Cranson Capital believes it has hit on a winning way for investors to benefit from the rental market by buying newly built condos at a discount from condo developers.  Cranson Capital’s Toronto condo REIT is an alternative to buying or developing apartments in a market with skyrocketing land cost and rising rents.

Cranson is targeting condo developments that are coming onto the market now and presenting the double-barreled benefits of lower land costs and rising future rents.

“If we can get a block of units in these buildings and be the landlord and rent them out, as the rents go up everywhere else (because of rising land prices) we can have our rents escalate as well.  Our costs aren’t going to be as high as the new guy because we are buying from a developer who bought the land years ago,” said Devon Cranson, the company’s president.

The company’s president explained the plan initially was to either buy existing rental or develop in the city but quickly found out that it was priced out of the market.

“We like many have realized that condo is the new rental. Vacancy rates in the GTA are under 2% and in the downtown core it has been as low as 0.5%. There is a demand for rental and there is no supply so condo has been fulfilling that.”

A scarcity of development sites downtown

His firm estimated that land prices in the core have jumped by about 35% from 2014 to 2015 as real estate for development has become increasingly snapped up. “There is finally scarcity of land downtown, before 2015 there was still an abundance of sites and developers were buying them at $65 a foot on average. Today sites are closer to $120 a foot.”

To date, Cranson has been successful in acquiring units at a discount to retail prices paid by individuals (a mix of a volume discount, a tax saving for developers as well as savings passed on by not using a real estate agent, Cranson said).

So far it has contracted with one developer to buy 125 condo units in two separate projects and has closed on 30 of them to date.

• The company seeks developers with a good reputation and track record for such things as building quality and maintenance fees.

• It is concentrating on the downtown core region bounded by Davenport to the north to Lake Ontario bounded on the west by Dufferin St. to the Don Valley Parkway to the east. “We like that pocket because it has the lowest vacancy and the highest rent” and is well served by transit and set to benefit from new jobs created by the continuing office tower building boom.

• The company also wants to only  buy units that are close to completion. “We are not buying pre-construction and waiting a long time, we want to buy within 12 months of registration and we want a discount.”

The private REIT did provide a few relevant numbers on the initial purchase of 30 condos.

It laid down a “little less” than $3.5 million in equity on the 30 units as a 35% deposit with the remainder of the purchase price in a mortgage.

“The equity value of those units, because we bought at a discount and they have gone up in value already, on $3.5 million, we have already created $1.5 million in lift for investors in less than six months.”

The minimum investment for those looking to participate in the REIT is $10,000.