CRE industry must make more use of data

The commercial real estate industry can do a much better job of utilizing technology, data and analytics, and companies that don’t embrace them risk falling behind both indirect and direct competitors that maximize their use. 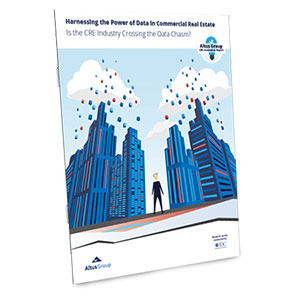 “Real estate is competing for investment with stocks, bonds and derivatives,” said Raj Singh, executive vice-president of Altus Group, which just issued an innovation report on harnessing the power of data. “The ability to leverage data and technology in the way that other sectors do is going to be a big differentiator.”

The report, based on a survey conducted by IDC in June and July of more than 300 international commercial real estate executives from firms that have at least $500 million in assets under management, found that 89 per cent of companies have major impediments to collecting and utilizing data to drive improved asset and investment management decision-making. The findings reveal a need for these firms to prioritize investment in data and analytics solutions, benchmarking capabilities and data management expertise in order to remain competitive.

“Firms that are able to analyze deals more quickly and make better decisions are the ones that are going to outperform their peers,” said Singh. “There’s potentially a very large payback for making an investment in data and technology.”

While companies may have a lot of data at their disposal, it often exists in silos and is difficult to connect and integrate into standardized formats that can be shared. This creates a lack of transparency and increases the potential for unnecessary risk if decisions are made without having as much information as possible behind them.

Although different stakeholders have different interests, they should all be establishing key benchmarks with which to compare themselves and their portfolios across multiple dimensions. However, while two-thirds of executives surveyed said increased comparative data and metrics are needed to effectively benchmark against the market, 28 per cent indicated that they don’t benchmark at all.

Forty-four per cent of survey respondents felt they don’t have sufficient executive sponsors who are actively involved in exploring innovative ways to leverage technology and data in their organization.

“There’s a lack of senior executive buy-in and support for investing in data and technology, and also a lack of skill sets and knowledge in knowing how to use these assets in their firms,” said Singh.

“They’re experts on real estate but not necessarily experts on data. As data and analytics become more important in the industry, and I think they will, that’s a gap that needs to be closed.”

Singh said several startup companies are collecting and benchmarking a wide range of data that would be useful to commercial real estate firms, but a lot of them aren’t aware or availing themselves of this information because it’s fragmented and isn’t being aggregated in one place.

Nevertheless, these data collection startups may help to level the playing field for small real estate companies that seek out their services since they likely don’t have the financial wherewithal or know-how to create in-house systems as larger competitors potentially do.

While technology, data and analytics challenges seem to be spread out around the globe, they may be felt more acutely in Canada because large Canadian pension funds and investment managers tend to invest more globally than their American and European counterparts. Dealing with cross-border issues, different regulations and currencies makes managing international portfolios more complex than overseeing domestic properties. Having strong and integrated data can make this easier.

Strides are being made to correct the problems pointed out in the survey, however, as more than 75 per cent of firms said investing in technology and technology-enabled process improvement to support asset and portfolio decision-making is a major priority. Furthermore, 68 per cent of commercial real estate leaders plan to increase their investment in data and analytics over the next two years.

“Real estate companies are used to managing assets and investing in assets, and they need to understand that data is an asset,” said Singh.