Crestpoint on buying spree in 2016 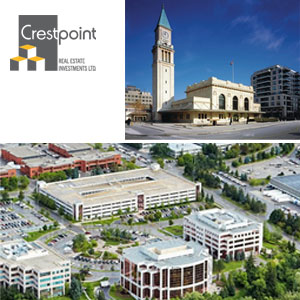 “We look for core assets with steady income and we also look for assets with both short-term and long-term upside,” said Crestpoint founder and president Kevin Leon.

“Some of these assets can be real core assets and others can be core-plus, which means that long term we believe there are things we can do to the assets to increase their income. Some of them are shorter term opportunities where there are vacancies or there’s redevelopment potential where we can get at the income a little quicker.”

Crestpoint has generated a five-year annualized return of more than 14 per cent for investors while building a portfolio of 158 office, industrial and retail properties that exceed 17 million square feet. A 2016 buying spree has added 2.5 million square feet valued at approximately $660 million to the investment manager’s holdings.

Crestpoint acquired the iconic North Toronto Station retail property for approximately $36.5 million, partnering with Westdale Construction Co. Limited, an existing owner and manager of the property. The former Canadian Pacific Railway station located on Yonge Street near the Summerhill subway station in the affluent Rosedale neighbourhood encompasses 35,283 square feet and is fully leased to the Liquor Control Board of Ontario until 2028.

Crestpoint also purchased a 327,000-square-foot state-of-the-art distribution facility in Montreal for $37.5 million from Dream Industrial REIT. The property, which is fully leased to The Brick until 2024, is the furniture and houseware retailer’s sole warehouse for servicing eastern Canada. It’s situated on 28.5 acres and has an additional 9.5 acres available for future expansion.

“The Brick has almost eight years left on their lease and they have the right to expand,” explained Leon. “So during the term of their lease we would have to get permission from them to build on the land.

“So it’s unlikely that we’ll build on the land during the first term of the lease. What we’ll do is re-explore that option when the lease expires or if The Brick comes to us prior to the lease expiring saying they need more space. Then obviously we could expand. If they come to us at the end of the lease and say they want to stay but have no use for the land, then we could explore building an additional commercial or industrial building.”

When New York-based Kimco Realty pulled out of Canada, Crestpoint jumped at the opportunity to fill a void and affiliate with Kimco’s partner in the west.

Partnering with Vancouver based Anthem Properties, Crestpoint has acquired a 90-per cent interest in a $362-million shopping centre portfolio with properties in British Columbia and Alberta. The shopping centres are primarily anchored by grocery stores and other convenience retailers, including drug and liquor stores. The properties are 97 per cent leased, with many major tenants signed on long term, and encompass more than 1.4 million square feet of space.

“In the case of Alberta, they’re more resilient to a downturn in the economy, and in the case of B.C., it’s just hard to acquire retail assets,” said Leon of the reasoning behind the purchase.

“We had the opportunity to buy 11 shopping centres in Calgary, Edmonton, Kelowna, Kamloops, Prince George and the lower mainland at a good return with steady increases in income and with a little bit of development potential. There are a couple of pads that can be added to it. There’s good, long-term core real estate in those markets.”

Purchases from earlier in 2016

There’s potential to add another office building on the Markham property, though Leon said that no construction is imminent. Crestpoint is looking at adding a 30,000-square-foot building in the parking lot of the Castlefield property to add value to it.

Crestpoint isn’t content to sit back after this flurry of activity, as Leon said there’s more in the pipeline.

“We’re working on one active mixed-use project in the GTA (Greater Toronto Area) with office, industrial and retail that we’ve been working on for quite a while. It’s of the sale-leaseback variety with additional development land to build new buildings. That’s something that we’re actively working on, although it’s probably a few months from getting completed.”

Despite what Leon described as a “challenging” Canadian real estate market, he said Crestpoint will continue to look to deploy capital in order to make good, risk-adjusted returns.

“There’s a lot of competition and you have to be very prudent when you’re looking at potential investments. That being said, we really feel good about the fundamentals of the market. Outside of the Alberta office market, we feel that the fundamentals are still really strong.”

Crestpoint is part of Connor, Clark & Lunn Financial Group, a multi-boutique asset management company that provides investment management products and services to institutional, high net worth and retail clients. With offices in Vancouver, Victoria, Edmonton, Calgary, Regina, Winnipeg, Toronto, Ottawa, Montreal, New York City and London, the company and its affiliates were collectively responsible for the management of approximately $67 billion in assets as of June 30.