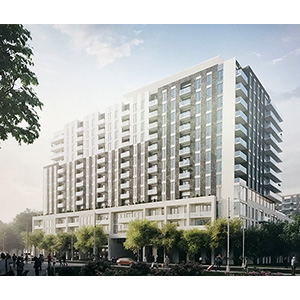 “We are delighted to be working with PrinceDev, an excellent Canadian urban developer, to develop these two exciting projects,” said Crombie president and CEO Don Clow in a release. “It results in Crombie adding an exciting Montreal mixed-use development site to our current active projects in Vancouver, Oakville, Victoria (Langford), and St John’s.”

One partnership results in Crombie becoming a 50 per cent partner in the new Le Duke development at 297 Rue Duke, adjacent to the new Bonaventure Greenway in Old Montreal.

The project is a $127-million investment to construct a 25-storey mixed-use tower with 390 residential rental units, above a 25,000-square-foot IGA-branded Sobeys (EMP-A-T) grocery store, 1,000 square feet of retail space with frontage on William Street and 300 underground parking stalls.

The new building will retain the existing heritage building currently on site, integrating the two-storey facade and structure into the new development.

The existing 30,000-square-foot Sobeys is expected to remain operational during the redevelopment.

Bronte Village is expected to commence construction in 2018 with completion estimated in 2020.

Crombie said in the release both projects are in early development stages with some outstanding approvals and financing still to be completed.

Prince Developments was formed in 2009 as a joint venture between Place Dorée and Groupe Canvar and has since completed numerous successful projects in Quebec and Ontario. Headquartered in Montreal, PrinceDev specializes in residential, hotel, and mixed use developments.